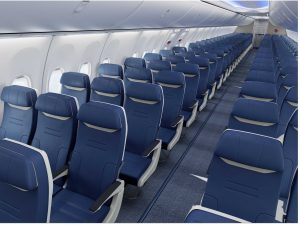 If you have been a plane recently and started to feel like maybe you don’t quite fit in the seats the way you used to, you are not alone. Apparently, the airline industry, as a whole, has been making seats not only much smaller but also closer together and with less leg room.

As a matter of fact, the D.C. Circuit Court of Appeals said, on Friday, that the Federal Aviation Administration (FAA) must review—for the second time—a petition from the nonprofit consumer advocacy group Flyers Rights. This petition, submitted on August 26 of 2015 says that smaller airplane seat sizes threaten the safety, health, and comfort of all passengers.

Of course, the agency denied this request, claiming that the petition did not warrant any action because the issues raised in the petition “related to passenger health and comfort, and did not raise an immediate safety or security concern.”

Still, the FAA did claim that they had successfully performed emergency evacuation tests with the current seat dimensions. Fortunately for the advocacy group, though, the DC Appeals Court said the could not give the FAA traditional deference because the agency never disclosed the results of these tests.

The court said: “Indeed, we have long held that, when ‘the data relied on by an agency in reaching its decision is not included in the administrative record and is not disclosed to the court,’ we cannot determine whether the final agency decision reflects the rational outcome of the agency’s consideration of all relevant factors. Whatever deference we generally accord to administrative agencies, we will not defer to a declaration of fact that is ‘capable of exact proof’ but is unsupported by any evidence.”

As such, the court has ordered for the administration to review the petition again.

The court goes on to say, “If the petition for rulemaking is again denied, the administration must provide appropriate record support for its decision.”

Now, the Flyers Group has asked for the court to order that the FAA institute a new rulemaking but the court responded that it will not. “Our case,” the court states, “make clear that such a remedy is appropriate only ‘in the rarest and most compelling of circumstances.”