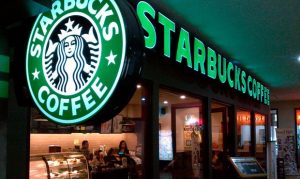 Several Wall Street firms downgraded their shares of Starbucks, today, after the company showed a sales guidance lower than analysts expected and announced the closure of all 379 Teavana mall-based stores. CEO Kevin Johnson said that the stores have not, in fact, been doing very well.

He tells, “We conducted a strategic review of the Teavana mall-based store business and concluded that despite our efforts to reverse the trend through creative merchandising and new store designs, the underperformance was likely to continue.”

He adds that the company expects to sell more than $1.6 billion of Teavana branded, handcrafted beverages through Starbucks stores, globally, this year. Also, he notes that the tea brand has grown at least 40 percent since its US launch 5 years ago and is up more than 60 percent since its launch in Asia (China and Japan) about one year ago.

Wall Street had expected Starbucks to have global comparable sales growth guidance of 5 percent but the company said they would only have between 3 and 4 percent.

Stifel analyst Astrachan explains, “Our hold rating on Starbucks shares reflects our view that global and US comp store sales will continue their decelerating trend due to macroeconomic factors in retail/restaurants and share loss.” in the client note, Thursday, he goes on to say, “We believe both pressures could lead to a need for increased investment to change the current glide path, ultimately resulting in management reducing long-term EPS targets.”

As such, shares of the world’s most famous coffee chain fell 7 percent in early trading on Friday morning.

Perhaps more importantly, though, this probably should not have come as much of a surprise for anyone paying attention to the company’s financials. After all, shares of Starbucks only rose about 2 percent over the past 12 months, against the Standard & Poor 500’s 14 percent return.

In addition, Guggenheim Securities also downgraded the coffee chain—though, thankfully, only from buy to neutral—on its revised guidance of the stock and in observance of slowing rewards membership growth. Guggenheim analyst Matthew DiFrisco said, Friday, “In FY17 SBUX has struggled to unlock the next meaningful sales-driving initiative. Their digital platform and Starbucks Rewards is beginning to show stagnant growth, as it delivered 36 percent of total sales for the quarter, inline with F2Q17.”

Comparably, Astrachan reduced his price target from $66 to $58; DiFrisco from $70 to $58. Both represent a 3 percent downside.