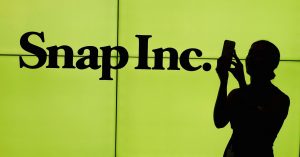 After the results were announced the stock of the company fell by over 23% on Wednesday in after-hours trading. The stock performance was reminiscent of what happened to the stocks of other social media companies such as Twitter and Facebook following the announcement of their first quarterly results after going public. In the case of the two, their stocks fell 14% on average after releasing their first quarter results as public companies.

Some of the challenges Snap is facing include fierce competition from Facebook and this has included its popular features such as ‘Stories’ being copied. Stories is a tool which allows users to upload short videos detailing experiences in their daily lives.

“It’s really hard not to think about Facebook and everything they’ve been doing in the last six to nine months hasn’t had a pretty negative impact on Snap’s growth trajectory over that period of time,” said CFRA Research’s Scott Kessler.

No to growth hacking

Taking a swipe at Facebook Snap’s chief executive office Evan Spiegel, however, said that merely copying features was not sustainable and would not guarantee long-term success. Spiegel gave the example of Yahoo in its early years when it had a search engine but that didn’t translate to success for in the search business in the way it did for Google.

On the issue of growth strategies, Spiegel also said that it wouldn’t be following the methods and tactics that its rivals have employed such as routinely suggesting to its users the friends they could add. Additionally, Spiegel in the earnings call said that the company had no plans to offer financial guidance since he didn’t want to get into the habit of making shortsighted decisions in order to benefit quarterly results.