Sinclair is About To Sign A Deal To Acquire Tribune 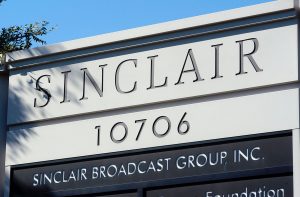 You might not know who the Sinclair broadcasting group is, but that might change as the Baltimore, MD-based company is set to control roughly one-third of all television programming in the United States. Sinclair has announced, this week, they are preparing to sign a deal to acquire Tribune Media in an effort to continue expanding its empire of local tv stations, following new rule changes from the United States Federal Communications Commission.

This new deal, which we can expect to see as early as today, will certainly cement Sinclair’s status as a broadcast industry powerhouse. The company already has 173 properties, making it the single largest local stations owner within the United States. In this deal, Sinclair will likely pay just shy of $44 per share for Tribune, which gives Tribune a valuation of about $3.8 billion. This deal is expected to close in the final quarter of the year, with Tribune stockholders receiving approximately $35 in cash per share as well as 0.23 shares of Sinclair Class A common stock for each share of Tribune Class A common stock and Tribune Class B common stock they own.

Sinclair CEO Chris Ripley comments, “This is a transformational acquisition for Sinclair that will open up a myriad of opportunities for the company. The Tribune stations are highly complementary to Sinclair’s existing footprint and will create a leading nationwide media platform that includes our country’s largest markets.”

Following this announcement, shares of Tribune were already trading at least 5 percent higher on Monday morning. Sinclair shares, oddly, were at a halt on Monday morning, awaiting the finalization of the news, but have already resumed.

When the deal is complete, then, it could put Sinclair in quite the actionable position, poised to take on other small local stations. And, actually, picking up Tribune will give Sinclair a special advantage over the Fox networks. Basically, Sinclair will now control most of the Fox affiliates across the United States. That, of course, is very important in a time when political shows and reporting are center stage.