McCormick & Company, Incorporated (NYSE:MKC – Get Rating) updated its third quarter 2022 earnings guidance on Thursday. The company provided earnings per share guidance of $0.65-$0.65 for the period, compared to the consensus earnings per share estimate of $0.83. The company issued revenue guidance of $1.59 billion-$1.59 billion, compared to the consensus revenue estimate of $1.63 billion. McCormick & Company, Incorporated also updated its FY 2022 guidance to $2.63-$2.68 EPS.

The business also recently disclosed a quarterly dividend, which was paid on Monday, July 25th. Shareholders of record on Monday, July 11th were issued a dividend of $0.37 per share. The ex-dividend date of this dividend was Friday, July 8th. This represents a $1.48 annualized dividend and a yield of 1.95%. McCormick & Company, Incorporated’s payout ratio is presently 58.50%.

In other McCormick & Company, Incorporated news, Director Margaret M. V. Preston sold 10,580 shares of the business’s stock in a transaction dated Wednesday, June 29th. The stock was sold at an average price of $84.44, for a total transaction of $893,375.20. Following the sale, the director now owns 12,660 shares in the company, valued at approximately $1,069,010.40. The transaction was disclosed in a filing with the SEC, which is available through this link. Corporate insiders own 15.90% of the company’s stock.

McCormick & Company, Incorporated manufactures, markets, and distributes spices, seasoning mixes, condiments, and other flavorful products to the food industry. It operates in two segments, Consumer and Flavor Solutions. The Consumer segment offers spices, herbs, and seasonings, as well as condiments and sauces, and desserts. 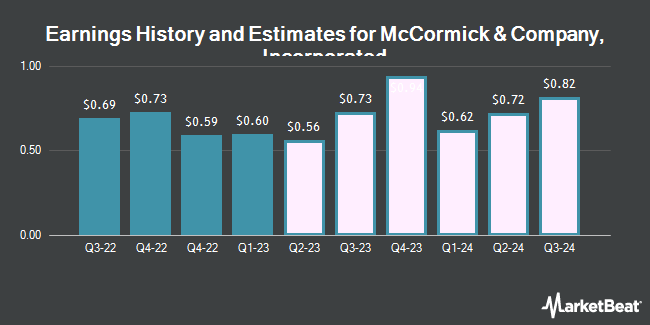 Complete the form below to receive the latest headlines and analysts' recommendations for McCormick & Company Incorporated with our free daily email newsletter: