Wall Street brokerages expect Century Casinos, Inc. (NASDAQ:CNTY – Get Rating) to report sales of $113.07 million for the current quarter, Zacks reports. Three analysts have provided estimates for Century Casinos’ earnings. The lowest sales estimate is $111.70 million and the highest is $114.50 million. Century Casinos posted sales of $92.19 million during the same quarter last year, which would indicate a positive year over year growth rate of 22.6%. The business is scheduled to issue its next earnings report on Monday, January 1st.

On average, analysts expect that Century Casinos will report full year sales of $446.13 million for the current fiscal year, with estimates ranging from $439.80 million to $452.30 million. For the next financial year, analysts anticipate that the business will report sales of $522.87 million, with estimates ranging from $457.40 million to $559.10 million. Zacks’ sales calculations are an average based on a survey of sell-side analysts that cover Century Casinos.

Century Casinos (NASDAQ:CNTY – Get Rating) last issued its earnings results on Friday, May 6th. The company reported $0.01 earnings per share (EPS) for the quarter, missing analysts’ consensus estimates of $0.11 by ($0.10). Century Casinos had a return on equity of 15.31% and a net margin of 5.31%. The firm had revenue of $103.10 million during the quarter, compared to the consensus estimate of $100.80 million. During the same quarter in the prior year, the business earned ($0.05) earnings per share.

In other Century Casinos news, CEO Erwin Et Al Haitzmann bought 7,500 shares of the firm’s stock in a transaction dated Thursday, March 10th. The stock was purchased at an average cost of $11.21 per share, with a total value of $84,075.00. The transaction was disclosed in a document filed with the SEC, which is available through this hyperlink. Company insiders own 12.80% of the company’s stock.

Century Casinos, Inc operates as a casino entertainment company in the United States, Canada, and Poland. The company develops and operates gaming establishments, as well as related lodging, restaurant, horse racing, and entertainment facilities. As of March 8, 2022, it operated two ship-based casinos. 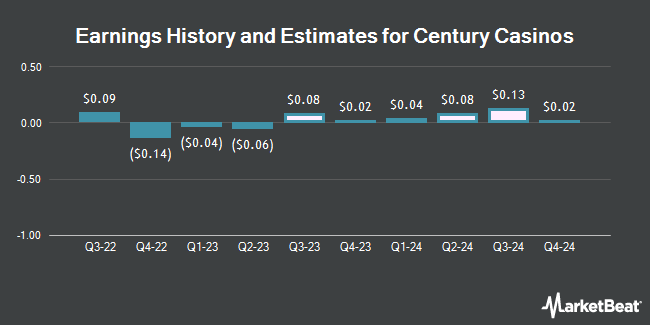 Complete the form below to receive the latest headlines and analysts' recommendations for Century Casinos with our free daily email newsletter: