Eventide Asset Management LLC boosted its stake in Smartsheet Inc (NYSE:SMAR – Get Rating) by 2.1% in the fourth quarter, according to its most recent Form 13F filing with the Securities and Exchange Commission. The firm owned 678,000 shares of the company’s stock after purchasing an additional 13,869 shares during the quarter. Eventide Asset Management LLC owned about 0.53% of Smartsheet worth $52,511,000 as of its most recent SEC filing.

Smartsheet (NYSE:SMAR – Get Rating) last released its quarterly earnings results on Tuesday, March 15th. The company reported ($0.40) EPS for the quarter, topping analysts’ consensus estimates of ($0.43) by $0.03. Smartsheet had a negative net margin of 31.06% and a negative return on equity of 29.45%. The business had revenue of $157.39 million during the quarter, compared to analysts’ expectations of $151.60 million. During the same quarter in the previous year, the company earned ($0.21) EPS. The business’s quarterly revenue was up 43.2% compared to the same quarter last year. As a group, analysts anticipate that Smartsheet Inc will post -1.59 EPS for the current fiscal year.

Smartsheet, Inc engages in managing and automating collaborative work. Its platform provides solutions that eliminate the obstacles to capturing information, including a familiar and intuitive spreadsheet interface as well as easily customizable forms. The company was founded by W. Eric Browne, Maria Colacurcio, John D. 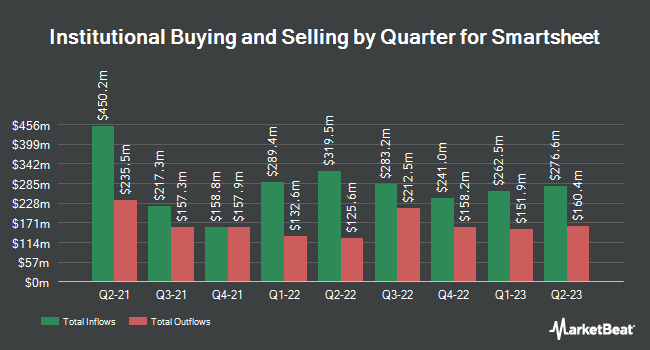 Louisiana-Pacific Cut to Neutral at Bank of America

Complete the form below to receive the latest headlines and analysts' recommendations for Smartsheet with our free daily email newsletter: