Watts Water Technologies (NYSE:WTS – Get Rating) last released its quarterly earnings data on Tuesday, May 3rd. The technology company reported $1.63 EPS for the quarter, beating the consensus estimate of $1.37 by $0.26. Watts Water Technologies had a return on equity of 17.41% and a net margin of 9.60%. The company had revenue of $463.20 million for the quarter, compared to analyst estimates of $442.80 million. During the same period last year, the company posted $1.24 earnings per share. The firm’s revenue was up 12.1% compared to the same quarter last year.

In other news, insider Elie Melhem sold 5,600 shares of the firm’s stock in a transaction dated Wednesday, March 2nd. The stock was sold at an average price of $145.04, for a total transaction of $812,224.00. The sale was disclosed in a filing with the Securities & Exchange Commission, which can be accessed through this link. 1.00% of the stock is owned by company insiders.

The firm also recently announced a quarterly dividend, which will be paid on Wednesday, June 15th. Stockholders of record on Wednesday, June 1st will be paid a dividend of $0.30 per share. The ex-dividend date of this dividend is Tuesday, May 31st. This is an increase from Watts Water Technologies’s previous quarterly dividend of $0.26. This represents a $1.20 annualized dividend and a dividend yield of 0.91%. Watts Water Technologies’s dividend payout ratio (DPR) is currently 19.73%.

About Watts Water Technologies (Get Rating)

Watts Water Technologies, Inc designs, manufactures, and sells products, solution, and systems that manage and conserve the flow of fluids and energy into, through and out of buildings in the commercial and residential markets in the Americas, Europe, the Asia-Pacific, the Middle East, and Africa. The company offers residential and commercial flow control products, including backflow preventers, water pressure regulators, temperature and pressure relief valves, and thermostatic mixing valves. 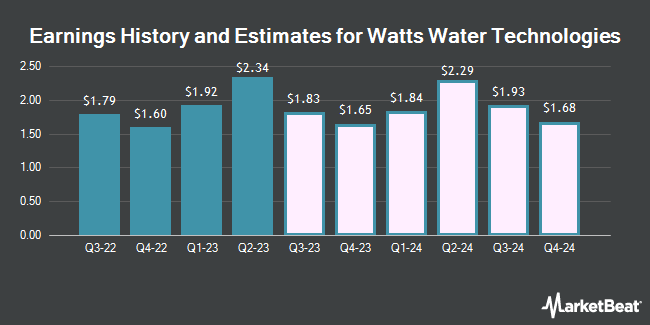 Complete the form below to receive the latest headlines and analysts' recommendations for Watts Water Technologies with our free daily email newsletter: