Raymond James Financial Services Advisors Inc. increased its stake in Lincoln Electric Holdings, Inc. (NASDAQ:LECO) by 4.5% during the third quarter, Holdings Channel.com reports. The firm owned 6,598 shares of the industrial products company’s stock after purchasing an additional 282 shares during the quarter. Raymond James Financial Services Advisors Inc.’s holdings in Lincoln Electric were worth $850,000 as of its most recent filing with the SEC.

Lincoln Electric (NASDAQ:LECO) last released its quarterly earnings data on Thursday, October 28th. The industrial products company reported $1.56 EPS for the quarter, beating the Zacks’ consensus estimate of $1.54 by $0.02. Lincoln Electric had a net margin of 8.66% and a return on equity of 42.54%. The company had revenue of $806.50 million during the quarter, compared to the consensus estimate of $806.23 million. During the same quarter in the prior year, the firm earned $1.10 EPS. Lincoln Electric’s quarterly revenue was up 20.6% on a year-over-year basis. As a group, sell-side analysts expect that Lincoln Electric Holdings, Inc. will post 6.16 earnings per share for the current year.

The business also recently disclosed a quarterly dividend, which was paid on Friday, January 14th. Investors of record on Friday, December 31st were given a dividend of $0.56 per share. The ex-dividend date was Thursday, December 30th. This represents a $2.24 dividend on an annualized basis and a dividend yield of 1.65%. This is a boost from Lincoln Electric’s previous quarterly dividend of $0.51. Lincoln Electric’s dividend payout ratio (DPR) is presently 50.45%.

See Also: How to calculate the annual rate of depreciation

Want to see what other hedge funds are holding LECO? Visit HoldingsChannel.com to get the latest 13F filings and insider trades for Lincoln Electric Holdings, Inc. (NASDAQ:LECO). 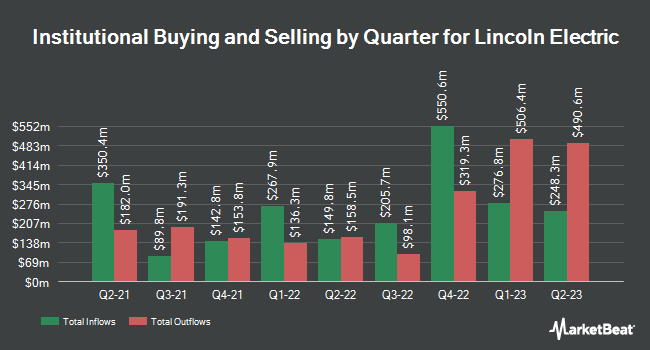 Complete the form below to receive the latest headlines and analysts' recommendations for Lincoln Electric with our free daily email newsletter: