Adaptimmune Therapeutics plc (NASDAQ:ADAP) CEO Adrian Rawcliffe sold 14,362 shares of Adaptimmune Therapeutics stock in a transaction dated Tuesday, January 11th. The stock was sold at an average price of $3.56, for a total value of $51,128.72. The transaction was disclosed in a document filed with the SEC, which can be accessed through this link.

A number of research firms recently issued reports on ADAP. Zacks Investment Research lowered Adaptimmune Therapeutics from a “buy” rating to a “hold” rating in a report on Monday, January 10th. SVB Leerink reissued a “hold” rating and issued a $7.00 price target on shares of Adaptimmune Therapeutics in a research note on Tuesday, November 9th. Finally, Wells Fargo & Company lifted their target price on Adaptimmune Therapeutics from $6.00 to $7.00 and gave the company an “equal weight” rating in a research note on Wednesday, September 22nd. One equities research analyst has rated the stock with a sell rating, four have assigned a hold rating and one has assigned a buy rating to the company. According to MarketBeat.com, the stock has a consensus rating of “Hold” and a consensus target price of $7.75.

Adaptimmune Therapeutics Plc engages in the development of novel cancer immunotherapy products. Its specific peptide enhanced affinity receptor platform enables the engineering of T-cells to target and destroy cancer, including solid tumors. The company was founded by Bent K. Jakobsen, James Julian Noble, and Helena Katrina Tayton-Martin in 2008 and is headquartered in Abingdon, the United Kingdom. 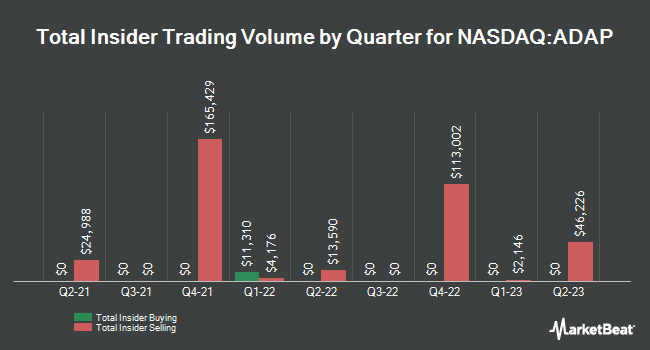 Complete the form below to receive the latest headlines and analysts' recommendations for Adaptimmune Therapeutics with our free daily email newsletter: