Brokerages expect that G1 Therapeutics, Inc. (NASDAQ:GTHX) will announce $5.58 million in sales for the current fiscal quarter, according to Zacks. Five analysts have made estimates for G1 Therapeutics’ earnings. The lowest sales estimate is $5.20 million and the highest is $6.71 million. G1 Therapeutics posted sales of $16.55 million during the same quarter last year, which would indicate a negative year-over-year growth rate of 66.3%. The business is scheduled to report its next earnings results on Wednesday, February 23rd.

On average, analysts expect that G1 Therapeutics will report full year sales of $31.26 million for the current fiscal year, with estimates ranging from $30.90 million to $32.39 million. For the next financial year, analysts forecast that the firm will report sales of $46.58 million, with estimates ranging from $38.64 million to $58.92 million. Zacks’ sales calculations are an average based on a survey of sell-side research analysts that follow G1 Therapeutics.

G1 Therapeutics (NASDAQ:GTHX) last released its earnings results on Wednesday, November 3rd. The company reported ($1.00) earnings per share (EPS) for the quarter, topping the consensus estimate of ($1.03) by $0.03. G1 Therapeutics had a negative return on equity of 65.66% and a negative net margin of 316.58%. During the same quarter in the previous year, the company earned ($0.31) earnings per share.

G1 Therapeutics, Inc engages in the development of small molecule therapeutics for the treatment of patients with cancer. Its products pipeline includes trilaciclib, rintodestrant, and lerociclib. The company was founded by Kwok-Kin Wong and Norman E. Sharpless on May 19, 2008 and is headquartered in Research Triangle Park, NC.

Recommended Story: How to Use the MarketBeat Retirement Calculator 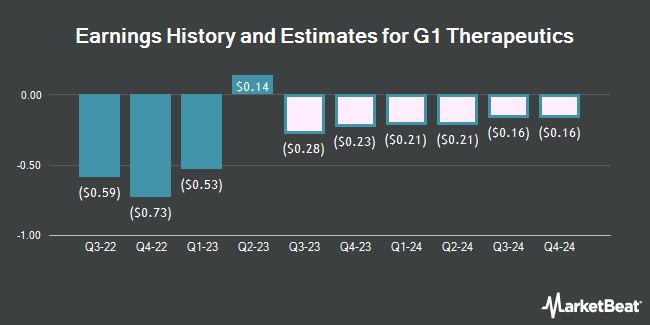 Complete the form below to receive the latest headlines and analysts' recommendations for G1 Therapeutics with our free daily email newsletter: