Equities research analysts expect Clearside Biomedical, Inc. (NASDAQ:CLSD) to post sales of $13.73 million for the current fiscal quarter, according to Zacks Investment Research. Four analysts have issued estimates for Clearside Biomedical’s earnings, with the lowest sales estimate coming in at $3.07 million and the highest estimate coming in at $24.00 million. Clearside Biomedical reported sales of $10,000.00 in the same quarter last year, which indicates a positive year over year growth rate of 137,200%. The business is scheduled to report its next earnings report on Wednesday, March 9th.

According to Zacks, analysts expect that Clearside Biomedical will report full-year sales of $17.62 million for the current financial year, with estimates ranging from $6.96 million to $27.89 million. For the next fiscal year, analysts anticipate that the firm will report sales of $12.76 million, with estimates ranging from $4.00 million to $19.57 million. Zacks Investment Research’s sales calculations are a mean average based on a survey of sell-side analysts that cover Clearside Biomedical.

Clearside Biomedical (NASDAQ:CLSD) last released its earnings results on Wednesday, November 10th. The company reported ($0.08) earnings per share for the quarter, topping analysts’ consensus estimates of ($0.09) by $0.01. Clearside Biomedical had a negative return on equity of 161.73% and a negative net margin of 652.60%. During the same period in the prior year, the business earned ($0.05) earnings per share.

In other Clearside Biomedical news, major shareholder Bradford T. Whitmore sold 99,400 shares of the business’s stock in a transaction on Monday, August 30th. The shares were sold at an average price of $7.06, for a total transaction of $701,764.00. Following the sale, the insider now directly owns 3,529,845 shares of the company’s stock, valued at approximately $24,920,705.70. The sale was disclosed in a document filed with the SEC, which is available through the SEC website. Over the last three months, insiders have sold 321,488 shares of company stock worth $2,227,836. Company insiders own 11.30% of the company’s stock.

Read More: Why are analyst ratings important in trading stocks? 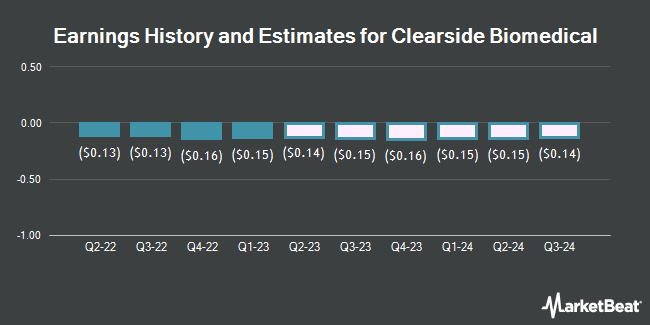 Complete the form below to receive the latest headlines and analysts' recommendations for Clearside Biomedical with our free daily email newsletter: