$922.63 Million in Sales Expected for ResMed Inc. (NYSE:RMD) This Quarter

Wall Street analysts predict that ResMed Inc. (NYSE:RMD) will announce sales of $922.63 million for the current quarter, according to Zacks. Four analysts have made estimates for ResMed’s earnings, with the highest sales estimate coming in at $935.00 million and the lowest estimate coming in at $915.60 million. ResMed posted sales of $800.01 million in the same quarter last year, which suggests a positive year over year growth rate of 15.3%. The company is expected to issue its next earnings results on Thursday, January 27th.

On average, analysts expect that ResMed will report full-year sales of $3.76 billion for the current financial year, with estimates ranging from $3.69 billion to $3.87 billion. For the next fiscal year, analysts forecast that the business will report sales of $4.00 billion, with estimates ranging from $3.85 billion to $4.21 billion. Zacks’ sales averages are an average based on a survey of analysts that that provide coverage for ResMed.

ResMed (NYSE:RMD) last posted its quarterly earnings data on Thursday, October 28th. The medical equipment provider reported $1.51 earnings per share for the quarter, beating the consensus estimate of $1.35 by $0.16. The firm had revenue of $904.00 million during the quarter, compared to analysts’ expectations of $858.20 million. ResMed had a net margin of 14.92% and a return on equity of 28.46%. The company’s quarterly revenue was up 20.2% compared to the same quarter last year. During the same quarter last year, the company posted $1.27 EPS.

ResMed, Inc engages in providing digital health and cloud-connected medical devices. Its digital health technologies and cloud-connected medical devices transform care for people with sleep apnea, chronic obstructive pulmonary disease, or COPD, and other chronic diseases. The firm operates through the following segments: Sleep and Respiratory Care, and Software as a Service. 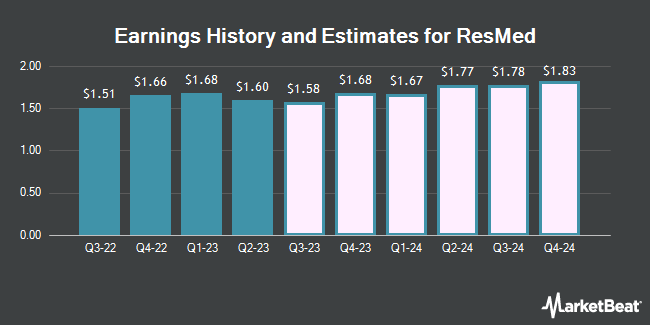 Receive News & Ratings for ResMed Daily - Enter your email address below to receive a concise daily summary of the latest news and analysts' ratings for ResMed and related companies with MarketBeat.com's FREE daily email newsletter.

Complete the form below to receive the latest headlines and analysts' recommendations for ResMed with our free daily email newsletter: