Helmerich & Payne (NYSE:HP) last released its quarterly earnings results on Wednesday, July 28th. The oil and gas company reported ($0.57) earnings per share for the quarter, hitting the consensus estimate of ($0.57). Helmerich & Payne had a negative return on equity of 9.21% and a negative net margin of 28.25%. The company had revenue of $332.21 million during the quarter, compared to the consensus estimate of $322.76 million. During the same quarter last year, the business posted ($0.34) earnings per share. As a group, research analysts expect that Helmerich & Payne will post -2.55 EPS for the current fiscal year.

The firm also recently announced a quarterly dividend, which will be paid on Wednesday, December 1st. Investors of record on Tuesday, November 23rd will be issued a dividend of $0.25 per share. The ex-dividend date of this dividend is Monday, November 22nd. This represents a $1.00 annualized dividend and a dividend yield of 3.18%. Helmerich & Payne’s payout ratio is -116.28%.

Founded in 1920, Helmerich & Payne, Inc (H&P) (NYSE: HP) is committed to delivering industry leading levels of drilling productivity and reliability. H&P operates with the highest level of integrity, safety and innovation to deliver superior results for its customers and returns for shareholders. 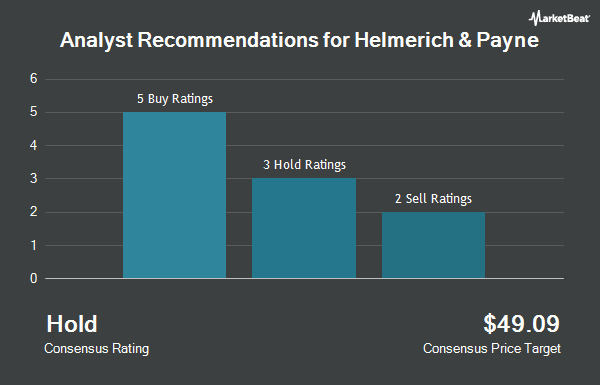 $0.63 EPS Expected for TowneBank This Quarter

ISS A/S Given Consensus Rating of “Hold” by Analysts

Complete the form below to receive the latest headlines and analysts' recommendations for Helmerich & Payne with our free daily email newsletter: