Fmr LLC boosted its position in ArcelorMittal (NYSE:MT) by 20.8% in the second quarter, HoldingsChannel reports. The firm owned 8,724,023 shares of the basic materials company’s stock after buying an additional 1,499,755 shares during the quarter. Fmr LLC’s holdings in ArcelorMittal were worth $270,967,000 as of its most recent SEC filing.

ArcelorMittal (NYSE:MT) last posted its quarterly earnings data on Thursday, July 29th. The basic materials company reported $3.46 earnings per share for the quarter, beating the Thomson Reuters’ consensus estimate of $2.70 by $0.76. The firm had revenue of $19.34 billion for the quarter, compared to analysts’ expectations of $19.67 billion. ArcelorMittal had a net margin of 11.49% and a return on equity of 15.22%. On average, research analysts anticipate that ArcelorMittal will post 12.56 EPS for the current year.

ArcelorMittal SA is a holding company, which engages in steelmaking and mining activities. It operates through the following business segments: NAFTA, Brazil, Europe, Africa and Commonwealth of Independent States (ACIS), Mining, and Others. The NAFTA segment consists of flat products such as slabs, hot-rolled coil, cold-rolled coil, coated steel, and plate.

Want to see what other hedge funds are holding MT? Visit HoldingsChannel.com to get the latest 13F filings and insider trades for ArcelorMittal (NYSE:MT). 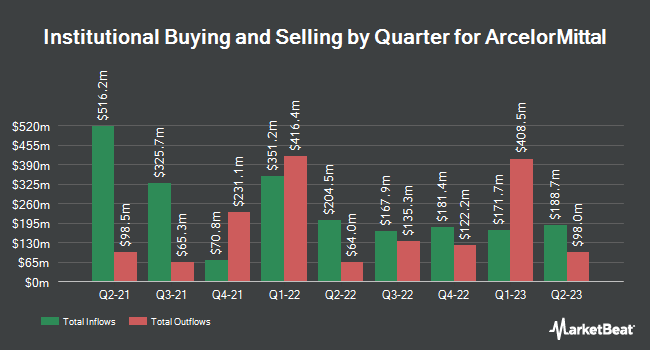 Complete the form below to receive the latest headlines and analysts' recommendations for ArcelorMittal with our free daily email newsletter: