BlackRock Inc. cut its holdings in shares of Lincoln National Co. (NYSE:LNC) by 0.1% during the second quarter, Holdings Channel.com reports. The fund owned 15,106,574 shares of the financial services provider’s stock after selling 21,949 shares during the period. BlackRock Inc. owned 0.08% of Lincoln National worth $949,298,000 at the end of the most recent reporting period.

Lincoln National (NYSE:LNC) last announced its earnings results on Wednesday, August 4th. The financial services provider reported $3.17 earnings per share (EPS) for the quarter, beating the Thomson Reuters’ consensus estimate of $2.30 by $0.87. Lincoln National had a return on equity of 5.47% and a net margin of 7.43%. The business had revenue of $4.85 billion during the quarter, compared to analyst estimates of $4.79 billion. During the same quarter in the previous year, the business earned $0.97 earnings per share. The company’s revenue for the quarter was up 37.9% compared to the same quarter last year. Equities research analysts expect that Lincoln National Co. will post 10.32 EPS for the current fiscal year.

The firm also recently announced a quarterly dividend, which will be paid on Monday, November 1st. Shareholders of record on Monday, October 11th will be given a dividend of $0.42 per share. The ex-dividend date is Thursday, October 7th. This represents a $1.68 annualized dividend and a dividend yield of 2.45%. Lincoln National’s dividend payout ratio (DPR) is presently 37.75%.

Lincoln National Corp. is a holding company, which operates multiple insurance and retirement businesses through its subsidiary companies. It provides advice and solutions that help empower people to take charge of their financial lives with confidence and optimism. The company operates through the following segments: Annuities, Retirement Plan Services, Life Insurance, Group Protection, and Other Operations.

Want to see what other hedge funds are holding LNC? Visit HoldingsChannel.com to get the latest 13F filings and insider trades for Lincoln National Co. (NYSE:LNC). 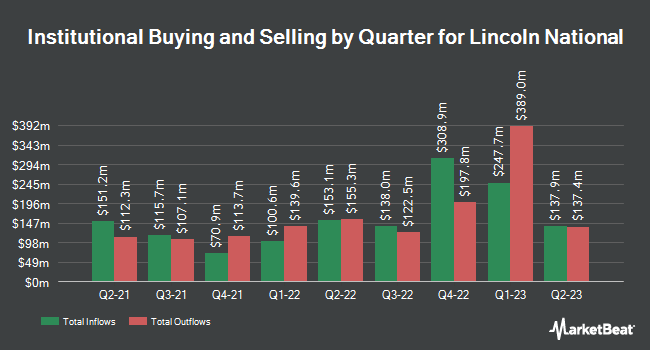 Teradyne Upgraded to Outperform at Cowen

Zymeworks Inc. Expected to Announce Earnings of -$1.18 Per Share

Complete the form below to receive the latest headlines and analysts' recommendations for Lincoln National with our free daily email newsletter: