Analysts expect Microchip Technology Incorporated (NASDAQ:MCHP) to post sales of $1.65 billion for the current fiscal quarter, according to Zacks Investment Research. Seven analysts have provided estimates for Microchip Technology’s earnings. Microchip Technology reported sales of $1.31 billion in the same quarter last year, which indicates a positive year-over-year growth rate of 26%. The company is scheduled to report its next quarterly earnings report on Thursday, November 4th.

According to Zacks, analysts expect that Microchip Technology will report full-year sales of $6.60 billion for the current year, with estimates ranging from $6.54 billion to $6.67 billion. For the next year, analysts expect that the business will post sales of $7.00 billion, with estimates ranging from $6.84 billion to $7.19 billion. Zacks Investment Research’s sales calculations are an average based on a survey of sell-side research analysts that cover Microchip Technology.

Microchip Technology (NASDAQ:MCHP) last released its earnings results on Tuesday, August 3rd. The semiconductor company reported $1.98 EPS for the quarter, topping the Thomson Reuters’ consensus estimate of $1.91 by $0.07. Microchip Technology had a return on equity of 32.10% and a net margin of 8.40%. The business had revenue of $1.57 billion for the quarter, compared to the consensus estimate of $1.55 billion. During the same period in the previous year, the company posted $1.56 earnings per share.

The business also recently declared a quarterly dividend, which was paid on Friday, September 3rd. Shareholders of record on Friday, August 20th were given a $0.437 dividend. This is a boost from Microchip Technology’s previous quarterly dividend of $0.41. The ex-dividend date was Thursday, August 19th. This represents a $1.75 dividend on an annualized basis and a yield of 1.12%. Microchip Technology’s dividend payout ratio is presently 29.86%. 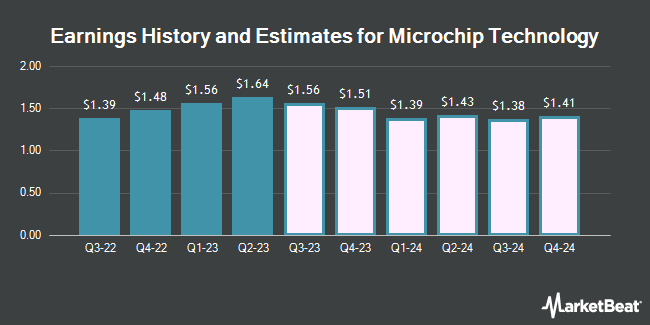 Confluent Price Target Increased to $68.00 by Analysts at Barclays

$15.62 Million in Sales Expected for Great Ajax Corp. This Quarter

Complete the form below to receive the latest headlines and analysts' recommendations for Microchip Technology with our free daily email newsletter: