Equities analysts expect that Cronos Group Inc. (NASDAQ:CRON) will announce sales of $18.43 million for the current quarter, Zacks Investment Research reports. Four analysts have made estimates for Cronos Group’s earnings, with estimates ranging from $16.10 million to $20.00 million. Cronos Group reported sales of $11.36 million during the same quarter last year, which indicates a positive year-over-year growth rate of 62.2%. The business is expected to announce its next earnings results on Thursday, November 4th.

On average, analysts expect that Cronos Group will report full year sales of $70.33 million for the current financial year, with estimates ranging from $64.80 million to $78.00 million. For the next year, analysts anticipate that the company will post sales of $153.70 million, with estimates ranging from $144.90 million to $163.00 million. Zacks Investment Research’s sales calculations are an average based on a survey of research analysts that cover Cronos Group.

Cronos Group (NASDAQ:CRON) last issued its quarterly earnings results on Thursday, August 5th. The company reported $0.15 earnings per share for the quarter, beating the Zacks’ consensus estimate of ($0.07) by $0.22. Cronos Group had a negative net margin of 258.59% and a negative return on equity of 9.48%. The company had revenue of $15.60 million during the quarter, compared to the consensus estimate of $18.48 million. During the same period in the prior year, the company earned ($0.31) EPS. Cronos Group’s revenue was up 57.6% on a year-over-year basis.

Cronos Group, Inc engages in the production and distribution of cannabis. Its brands include PEACE NATURALS, COVE, Spinach, Lord Jones, and PEACE+. The company was founded by Lorne Michael Gertner and Paul Rosen on August 21, 2012 and is headquartered in Toronto, Canada.

Featured Article: What is an economic bubble? 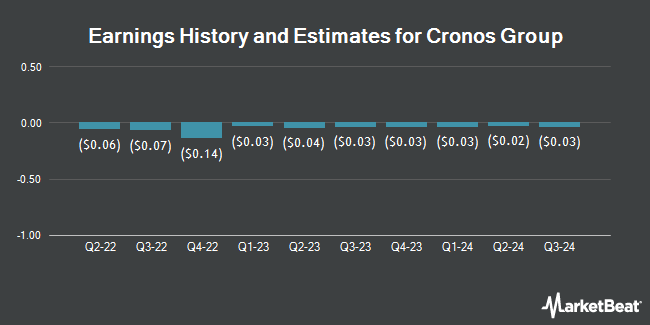 Emerson Electric Co. Expected to Announce Earnings of $1.19 Per Share

Complete the form below to receive the latest headlines and analysts' recommendations for Cronos Group with our free daily email newsletter: