Altabancorp (NASDAQ:ALTA) major shareholder Newbold Family Trust sold 2,500 shares of the company’s stock in a transaction that occurred on Tuesday, July 20th. The stock was sold at an average price of $40.97, for a total transaction of $102,425.00. The transaction was disclosed in a legal filing with the SEC, which is accessible through the SEC website. Large shareholders that own more than 10% of a company’s stock are required to disclose their sales and purchases with the SEC.

Altabancorp (NASDAQ:ALTA) last posted its quarterly earnings data on Tuesday, April 27th. The company reported $0.50 earnings per share for the quarter, meeting the Thomson Reuters’ consensus estimate of $0.50. The business had revenue of $28.98 million during the quarter, compared to the consensus estimate of $30.19 million. Altabancorp had a return on equity of 11.78% and a net margin of 32.29%. As a group, equities research analysts forecast that Altabancorp will post 2.15 earnings per share for the current fiscal year.

The company also recently disclosed a quarterly dividend, which was paid on Monday, May 17th. Stockholders of record on Monday, May 10th were issued a $0.15 dividend. This represents a $0.60 annualized dividend and a dividend yield of 1.46%. The ex-dividend date was Friday, May 7th. Altabancorp’s payout ratio is currently 26.20%.

Altabancorp operates as the bank holding company for Altabank, a state-chartered bank that provides retail and commercial banking products and services. The company accepts checking, rewards checking, savings, and money market deposit accounts, as well as individual retirement accounts and certificates of deposit.

See Also: How Important is Technical Analysis of Stocks 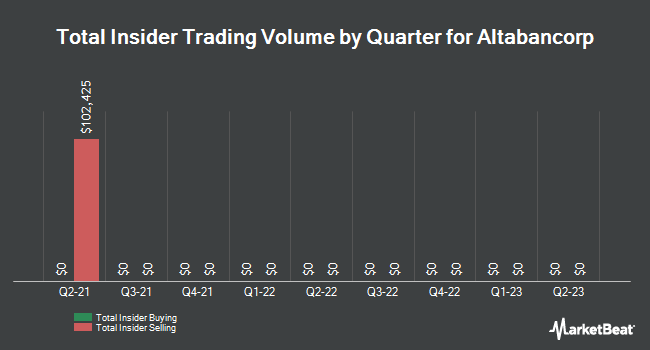 Tellurian Inc. Expected to Announce Earnings of -$0.05 Per Share

Complete the form below to receive the latest headlines and analysts' recommendations for Altabancorp with our free daily email newsletter: