Superior Plus Corp. (TSE:SPB) declared a monthly dividend on Thursday, June 10th, Zacks reports. Shareholders of record on Wednesday, June 30th will be given a dividend of 0.06 per share on Thursday, July 15th. This represents a $0.72 annualized dividend and a yield of 4.62%. The ex-dividend date is Tuesday, June 29th.

Superior Plus (TSE:SPB) last announced its quarterly earnings results on Wednesday, May 12th. The company reported C$0.36 EPS for the quarter, missing the Thomson Reuters’ consensus estimate of C$0.66 by C($0.30). The company had revenue of C$839.50 million during the quarter, compared to analyst estimates of C$743.50 million. Analysts predict that Superior Plus will post 0.75 earnings per share for the current fiscal year.

In other Superior Plus news, Senior Officer Elizabeth Summers bought 2,000 shares of the firm’s stock in a transaction dated Friday, May 14th. The shares were bought at an average price of C$14.92 per share, for a total transaction of C$29,840.00. Following the completion of the acquisition, the insider now owns 30,403 shares of the company’s stock, valued at C$453,612.76.

Further Reading: What is a capital gain? 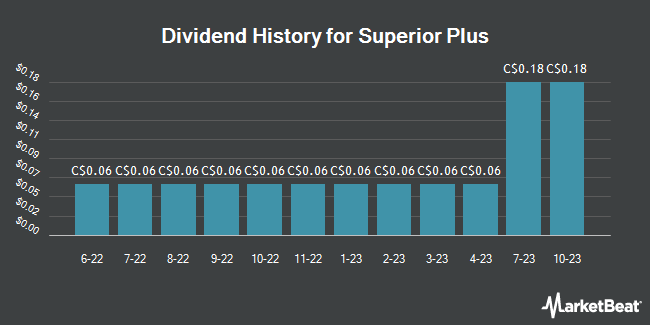 Daily Ratings & News for Superior Plus

Complete the form below to receive the latest headlines and analysts' recommendations for Superior Plus with our free daily email newsletter: