Equities research analysts predict that Sanderson Farms, Inc. (NASDAQ:SAFM) will announce sales of $1.30 billion for the current fiscal quarter, Zacks Investment Research reports. Two analysts have provided estimates for Sanderson Farms’ earnings. The lowest sales estimate is $1.29 billion and the highest is $1.30 billion. Sanderson Farms posted sales of $956.46 million during the same quarter last year, which suggests a positive year-over-year growth rate of 35.9%. The company is scheduled to report its next quarterly earnings report on Thursday, August 26th.

On average, analysts expect that Sanderson Farms will report full-year sales of $4.50 billion for the current fiscal year, with estimates ranging from $4.46 billion to $4.53 billion. For the next financial year, analysts forecast that the business will post sales of $4.47 billion, with estimates ranging from $4.38 billion to $4.56 billion. Zacks’ sales calculations are a mean average based on a survey of analysts that that provide coverage for Sanderson Farms.

In related news, Director Toni D. Cooley sold 2,551 shares of the firm’s stock in a transaction on Tuesday, March 16th. The shares were sold at an average price of $160.53, for a total value of $409,512.03. Following the completion of the transaction, the director now directly owns 25,568 shares of the company’s stock, valued at $4,104,431.04. The transaction was disclosed in a document filed with the Securities & Exchange Commission, which is available through this link. 5.36% of the stock is currently owned by company insiders.

The company also recently announced a quarterly dividend, which was paid on Tuesday, May 18th. Investors of record on Tuesday, May 4th were paid a $0.44 dividend. The ex-dividend date of this dividend was Monday, May 3rd. This represents a $1.76 annualized dividend and a dividend yield of 1.06%. Sanderson Farms’s dividend payout ratio is presently -429.27%. 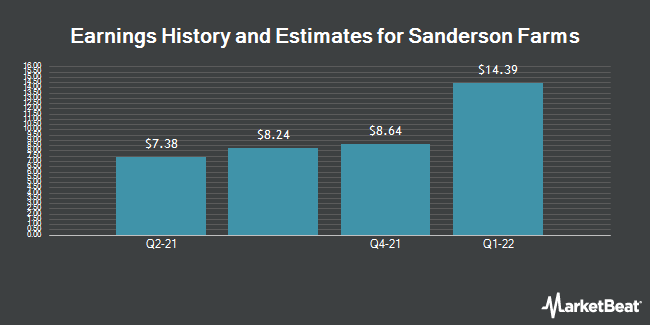