CWM Advisors LLC lessened its position in Amneal Pharmaceuticals, Inc. (NYSE:AMRX) by 6.3% in the first quarter, according to its most recent disclosure with the SEC. The firm owned 43,392 shares of the company’s stock after selling 2,922 shares during the period. CWM Advisors LLC’s holdings in Amneal Pharmaceuticals were worth $292,000 as of its most recent filing with the SEC.

In other news, EVP Joseph Todisco sold 36,330 shares of the firm’s stock in a transaction on Monday, March 15th. The stock was sold at an average price of $6.82, for a total value of $247,770.60. Following the transaction, the executive vice president now directly owns 316,270 shares in the company, valued at approximately $2,156,961.40. The transaction was disclosed in a document filed with the SEC, which is accessible through this link. Company insiders own 26.32% of the company’s stock.

Amneal Pharmaceuticals (NYSE:AMRX) last issued its earnings results on Thursday, May 6th. The company reported $0.20 earnings per share (EPS) for the quarter, beating the Thomson Reuters’ consensus estimate of $0.18 by $0.02. Amneal Pharmaceuticals had a return on equity of 42.02% and a net margin of 3.30%. The firm had revenue of $493.10 million for the quarter, compared to analyst estimates of $514.73 million. During the same period in the previous year, the company posted $0.20 earnings per share. The business’s revenue was down 1.1% on a year-over-year basis. Analysts predict that Amneal Pharmaceuticals, Inc. will post 0.56 EPS for the current fiscal year.

Want to see what other hedge funds are holding AMRX? Visit HoldingsChannel.com to get the latest 13F filings and insider trades for Amneal Pharmaceuticals, Inc. (NYSE:AMRX). 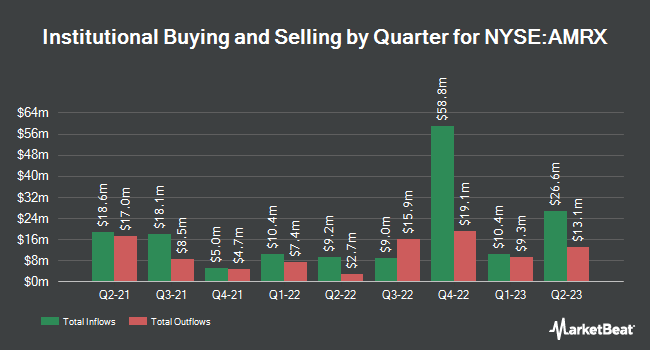 Melon Trading Up 3.3% Over Last Week

Complete the form below to receive the latest headlines and analysts' recommendations for Amneal Pharmaceuticals with our free daily email newsletter: