Complete the form below to receive the latest headlines and analysts' recommendations for Sage Therapeutics with our free daily email newsletter:

Wall Street analysts predict that Sage Therapeutics, Inc. (NASDAQ:SAGE) will announce $1.95 million in sales for the current fiscal quarter, Zacks Investment Research reports. Ten analysts have issued estimates for Sage Therapeutics’ earnings. The lowest sales estimate is $900,000.00 and the highest is $3.30 million. Sage Therapeutics posted sales of $2.29 million in the same quarter last year, which suggests a negative year over year growth rate of 14.8%. The business is expected to report its next earnings report before the market opens on Tuesday, May 4th.

Sage Therapeutics (NASDAQ:SAGE) last posted its quarterly earnings data on Tuesday, May 4th. The biopharmaceutical company reported ($1.64) EPS for the quarter, beating the Thomson Reuters’ consensus estimate of ($1.98) by $0.34. Sage Therapeutics had a negative net margin of 7,706.84% and a negative return on equity of 63.81%. The business had revenue of $1.58 million during the quarter, compared to analyst estimates of $2.03 million. During the same quarter last year, the firm posted ($2.44) earnings per share. The business’s revenue for the quarter was down 30.8% compared to the same quarter last year.

Sage Therapeutics, Inc, a biopharmaceutical company, develops and commercializes medicines to treat central nervous system disorders. Its lead product candidate is ZULRESSO, an intravenous formulation of brexanolone for the treatment of postpartum depression (PPD) in adults. The company's product pipeline also includes zuranolone, a neuroactive steroid, which is in Phase III clinical trials for treating PPD, major depressive disorders, bipolar depression, and generalized anxiety disorders; and SAGE-324, a compound that is in Phase II clinical trial to treat essential tremors, as well as has completed Phase I clinical trial for epilepsy and Parkinson's diseases.

Further Reading: Market Timing – The Benefits and the Danger 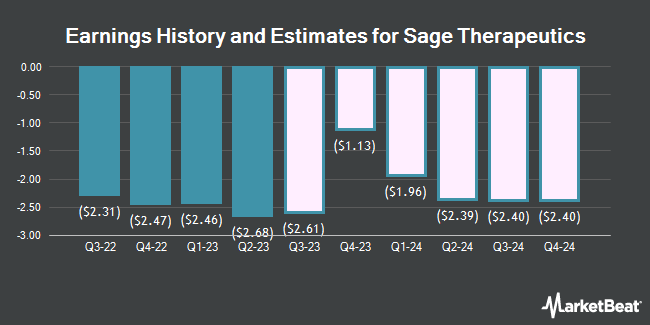