Complete the form below to receive the latest headlines and analysts' recommendations for Sotherly Hotels with our free daily email newsletter:

Brokerages expect that Sotherly Hotels Inc. (NASDAQ:SOHO) will report $16.35 million in sales for the current fiscal quarter, Zacks reports. Two analysts have provided estimates for Sotherly Hotels’ earnings, with the highest sales estimate coming in at $17.00 million and the lowest estimate coming in at $15.70 million. Sotherly Hotels reported sales of $37.21 million in the same quarter last year, which indicates a negative year-over-year growth rate of 56.1%. The business is scheduled to announce its next earnings results before the market opens on Wednesday, May 12th.

According to Zacks, analysts expect that Sotherly Hotels will report full year sales of $105.90 million for the current fiscal year, with estimates ranging from $105.00 million to $106.80 million. For the next financial year, analysts expect that the firm will report sales of $180.95 million, with estimates ranging from $178.90 million to $183.00 million. Zacks Investment Research’s sales calculations are an average based on a survey of sell-side analysts that that provide coverage for Sotherly Hotels.

Sotherly Hotels (NASDAQ:SOHO) last released its earnings results on Wednesday, March 3rd. The real estate investment trust reported ($1.02) EPS for the quarter, missing analysts’ consensus estimates of ($0.73) by ($0.29). Sotherly Hotels had a negative return on equity of 49.78% and a negative net margin of 38.08%.

Separately, Zacks Investment Research lowered shares of Sotherly Hotels from a “hold” rating to a “sell” rating in a research report on Thursday, February 18th.

In related news, Chairman Andrew Sims sold 21,000 shares of the company’s stock in a transaction on Monday, March 29th. The shares were sold at an average price of $3.53, for a total transaction of $74,130.00. Following the completion of the transaction, the chairman now owns 391,251 shares in the company, valued at $1,381,116.03. The sale was disclosed in a document filed with the SEC, which is available through this hyperlink. 13.70% of the stock is currently owned by corporate insiders.

Sotherly Hotels Inc is a self-managed and self-administered lodging REIT focused on the acquisition, renovation, upbranding and repositioning of upscale to upper-upscale full-service hotels in the Southern United States. Currently, the Company's portfolio consists of investments in twelve hotel properties, comprising 3,156 rooms, as well as interests in two condominium hotels and their associated rental programs.

Read More: How is Preferred Stock Different from Common Stock? 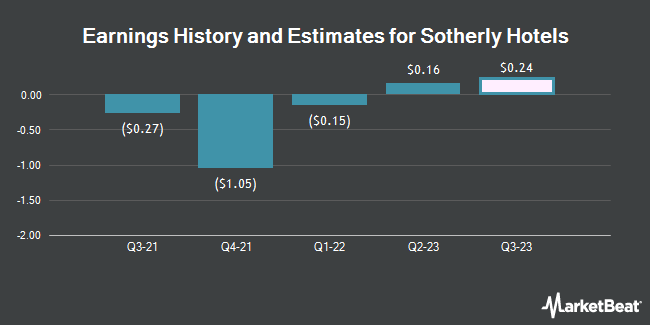 Rheinmetall AG Given Consensus Recommendation of “Buy” by Analysts

HAPI Trading Down 26.9% Over Last Week

Auctus Price Down 35.3% Over Last Week