Complete the form below to receive the latest headlines and analysts' recommendations for Southside Bancshares with our free daily email newsletter:

Analysts expect Southside Bancshares, Inc. (NASDAQ:SBSI) to report $56.50 million in sales for the current quarter, according to Zacks Investment Research. Two analysts have made estimates for Southside Bancshares’ earnings, with the lowest sales estimate coming in at $55.90 million and the highest estimate coming in at $57.10 million. Southside Bancshares reported sales of $62.50 million during the same quarter last year, which suggests a negative year-over-year growth rate of 9.6%. The company is scheduled to announce its next quarterly earnings report on Tuesday, May 4th.

On average, analysts expect that Southside Bancshares will report full year sales of $227.85 million for the current fiscal year, with estimates ranging from $225.50 million to $230.20 million. For the next fiscal year, analysts anticipate that the company will report sales of $229.20 million, with estimates ranging from $228.20 million to $230.20 million. Zacks’ sales calculations are a mean average based on a survey of research analysts that follow Southside Bancshares.

Southside Bancshares (NASDAQ:SBSI) last announced its quarterly earnings data on Tuesday, January 26th. The bank reported $0.89 earnings per share for the quarter, beating the Zacks’ consensus estimate of $0.64 by $0.25. The business had revenue of $62.80 million for the quarter, compared to analyst estimates of $60.40 million. Southside Bancshares had a net margin of 24.55% and a return on equity of 8.68%. The company’s revenue was up 12.9% on a year-over-year basis. During the same period last year, the business earned $0.51 EPS.

Separately, Zacks Investment Research upgraded Southside Bancshares from a “hold” rating to a “buy” rating and set a $43.00 price objective on the stock in a report on Friday, April 2nd.

The business also recently declared a quarterly dividend, which was paid on Thursday, March 4th. Investors of record on Thursday, February 18th were given a $0.32 dividend. The ex-dividend date was Wednesday, February 17th. This is a boost from Southside Bancshares’s previous quarterly dividend of $0.31. This represents a $1.28 dividend on an annualized basis and a yield of 3.34%. Southside Bancshares’s payout ratio is 58.18%.

Southside Bancshares, Inc operates as the bank holding company for Southside Bank that provides a range of financial services to individuals, businesses, municipal entities, and nonprofit organizations. Its deposit products include savings, money market, and interest and noninterest bearing checking accounts, as well as certificates of deposit. 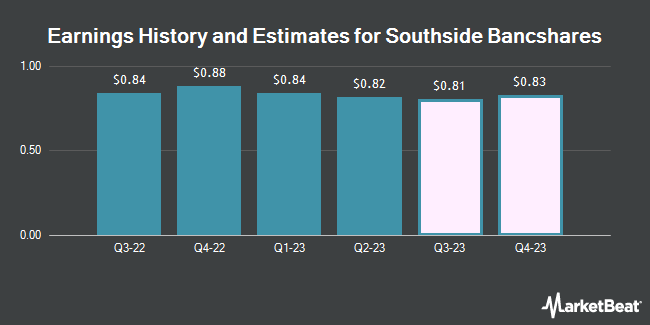