Complete the form below to receive the latest headlines and analysts' recommendations for Moderna with our free daily email newsletter:

Moderna, Inc. (NASDAQ:MRNA) Given Average Recommendation of “Hold” by Analysts

Moderna (NASDAQ:MRNA) last posted its quarterly earnings data on Thursday, February 25th. The company reported ($0.69) earnings per share for the quarter, missing analysts’ consensus estimates of ($0.25) by ($0.44). Moderna had a negative return on equity of 28.11% and a negative net margin of 242.73%. The company had revenue of $570.80 million for the quarter, compared to analysts’ expectations of $279.41 million. During the same period in the prior year, the company posted ($0.37) EPS. The firm’s revenue was up 3948.2% compared to the same quarter last year. Research analysts expect that Moderna will post -1.5 earnings per share for the current year.

See Also: How to Invest in Marijuana Stocks 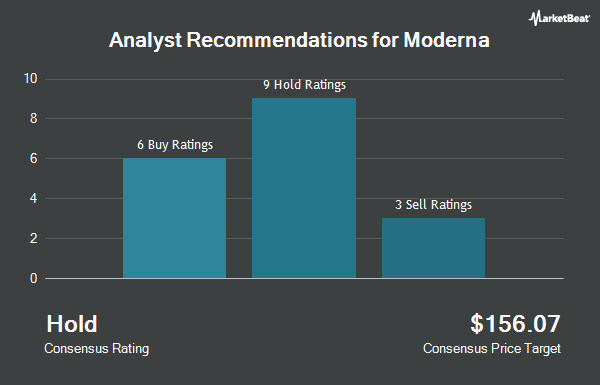 Receive News & Ratings for Moderna Daily - Enter your email address below to receive a concise daily summary of the latest news and analysts' ratings for Moderna and related companies with MarketBeat.com's FREE daily email newsletter.

$1.50 Billion in Sales Expected for NetApp, Inc. This Quarter

$361.53 Million in Sales Expected for Kforce Inc. This Quarter

$8.17 Billion in Sales Expected for Exelon Co. This Quarter