Complete the form below to receive the latest headlines and analysts' recommendations for Moody's with our free daily email newsletter:

Moody’s Co. (NYSE:MCO) Given Consensus Recommendation of “Buy” by Brokerages

Moody’s (NYSE:MCO) last issued its quarterly earnings data on Thursday, February 11th. The business services provider reported $1.91 EPS for the quarter, missing the Zacks’ consensus estimate of $1.97 by ($0.06). Moody’s had a return on equity of 170.55% and a net margin of 34.31%. The company had revenue of $1.29 billion for the quarter, compared to the consensus estimate of $1.22 billion. During the same quarter in the previous year, the company earned $2.00 earnings per share. Moody’s’s quarterly revenue was up 4.6% compared to the same quarter last year. On average, equities analysts expect that Moody’s will post 10.17 earnings per share for the current fiscal year.

The firm also recently disclosed a quarterly dividend, which will be paid on Thursday, March 18th. Investors of record on Thursday, February 25th will be paid a $0.62 dividend. This is an increase from Moody’s’s previous quarterly dividend of $0.56. This represents a $2.48 annualized dividend and a yield of 0.90%. The ex-dividend date of this dividend is Wednesday, February 24th. Moody’s’s dividend payout ratio is currently 27.02%.

Read More: How to calculate the annual rate of depreciation 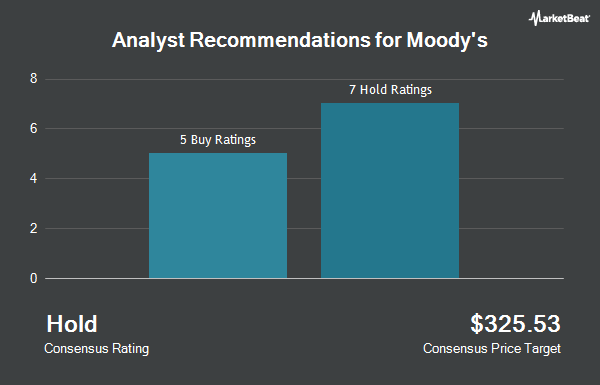 Receive News & Ratings for Moody's Daily - Enter your email address below to receive a concise daily summary of the latest news and analysts' ratings for Moody's and related companies with MarketBeat.com's FREE daily email newsletter.

HNI Lifted to Buy at Sidoti