Complete the form below to receive the latest headlines and analysts' recommendations for Marathon Petroleum with our free daily email newsletter:

Brokerages predict that Marathon Petroleum Co. (NYSE:MPC) will report sales of $15.94 billion for the current quarter, Zacks reports. Two analysts have made estimates for Marathon Petroleum’s earnings. The highest sales estimate is $16.88 billion and the lowest is $15.00 billion. Marathon Petroleum reported sales of $24.08 billion during the same quarter last year, which would suggest a negative year over year growth rate of 33.8%. The company is scheduled to announce its next earnings results on Tuesday, May 4th.

On average, analysts expect that Marathon Petroleum will report full-year sales of $65.45 billion for the current fiscal year, with estimates ranging from $60.00 billion to $69.62 billion. For the next financial year, analysts forecast that the firm will report sales of $73.61 billion, with estimates ranging from $60.00 billion to $83.14 billion. Zacks Investment Research’s sales averages are an average based on a survey of research firms that cover Marathon Petroleum.

Marathon Petroleum (NYSE:MPC) last announced its earnings results on Monday, February 1st. The oil and gas company reported ($0.94) earnings per share for the quarter, topping analysts’ consensus estimates of ($1.41) by $0.47. Marathon Petroleum had a negative net margin of 11.11% and a negative return on equity of 1.81%. The business had revenue of $18.19 billion during the quarter, compared to the consensus estimate of $17.68 billion. During the same quarter last year, the firm earned $1.56 earnings per share. Marathon Petroleum’s quarterly revenue was down 35.4% on a year-over-year basis.

The business also recently disclosed a quarterly dividend, which will be paid on Wednesday, March 10th. Stockholders of record on Wednesday, February 17th will be paid a $0.58 dividend. This represents a $2.32 annualized dividend and a dividend yield of 4.18%. The ex-dividend date of this dividend is Tuesday, February 16th. Marathon Petroleum’s payout ratio is presently 46.96%.

Marathon Petroleum Corporation, together with its subsidiaries, engages in refining, marketing, retailing, and transporting petroleum products primarily in the United States. It operates through three segments: Refining & Marketing, Retail, and Midstream. The Refining & Marketing segment refines crude oil and other feed stocks at its 16 refineries in the West Coast, Gulf Coast, and Mid-Continent regions of the United States; and purchases refined products and ethanol for resale. 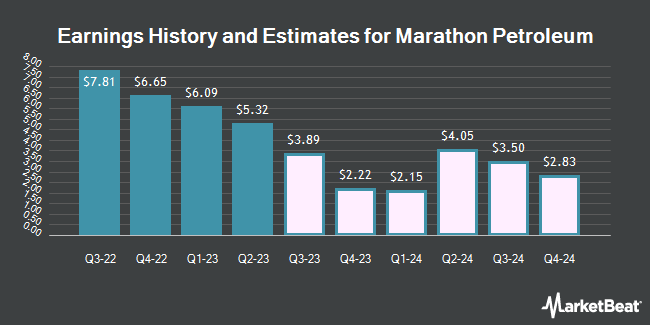 Dollar Tree, Inc. Expected to Announce Earnings of $2.12 Per Share