Complete the form below to receive the latest headlines and analysts' recommendations for Heartland Express with our free daily email newsletter:

Heartland Express (NASDAQ:HTLD) announced its earnings results on Monday. The transportation company reported $0.22 earnings per share for the quarter, hitting analysts’ consensus estimates of $0.22, Briefing.com reports. The business had revenue of $155.80 million for the quarter, compared to analyst estimates of $162.43 million. Heartland Express had a return on equity of 9.44% and a net margin of 10.04%. The company’s quarterly revenue was down 6.8% compared to the same quarter last year. During the same period in the prior year, the company earned $0.16 EPS.

Heartland Express, Inc, together with its subsidiaries, operates as a short-to-medium haul truckload carrier in the United States and Canada. The company primarily provides nationwide asset-based dry van truckload service for shippers from Washington to Florida and New England to California; and temperature-controlled truckload services.

Recommended Story: What are the economic characteristics of a bear market? 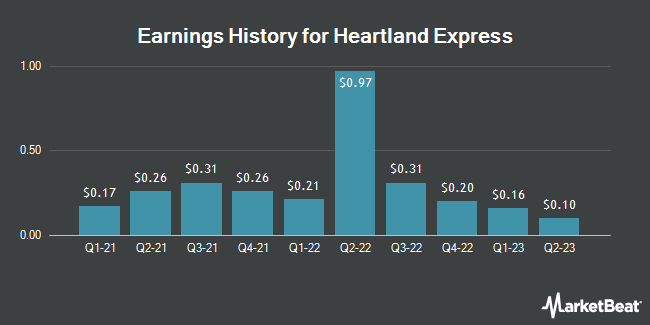