Complete the form below to receive the latest headlines and analysts' recommendations for First Busey with our free daily email newsletter:

Campbell & CO Investment Adviser LLC acquired a new stake in shares of First Busey Co. (NASDAQ:BUSE) in the third quarter, according to the company in its most recent Form 13F filing with the Securities & Exchange Commission. The firm acquired 21,747 shares of the bank’s stock, valued at approximately $346,000.

In other news, Director Stanley J. Bradshaw acquired 2,100 shares of the stock in a transaction dated Friday, July 31st. The shares were acquired at an average cost of $16.80 per share, for a total transaction of $35,280.00. Following the completion of the transaction, the director now owns 9,491 shares in the company, valued at approximately $159,448.80. The transaction was disclosed in a filing with the Securities & Exchange Commission, which is accessible through this hyperlink. Also, Director Stephen V. King bought 27,058 shares of the business’s stock in a transaction that occurred on Friday, August 14th. The stock was purchased at an average price of $18.44 per share, with a total value of $498,949.52. Following the completion of the purchase, the director now directly owns 12,936 shares of the company’s stock, valued at approximately $238,539.84. The disclosure for this purchase can be found here. In the last 90 days, insiders have bought 30,358 shares of company stock worth $554,030. Insiders own 7.50% of the company’s stock.

First Busey (NASDAQ:BUSE) last posted its quarterly earnings data on Tuesday, July 28th. The bank reported $0.47 earnings per share for the quarter, beating the consensus estimate of $0.26 by $0.21. First Busey had a return on equity of 8.51% and a net margin of 20.37%. The company had revenue of $98.78 million during the quarter, compared to analysts’ expectations of $98.26 million. Analysts anticipate that First Busey Co. will post 1.61 EPS for the current year.

The business also recently declared a quarterly dividend, which will be paid on Friday, October 30th. Shareholders of record on Friday, October 23rd will be given a $0.22 dividend. The ex-dividend date is Thursday, October 22nd. This represents a $0.88 annualized dividend and a yield of 5.03%. First Busey’s dividend payout ratio is 40.93%. 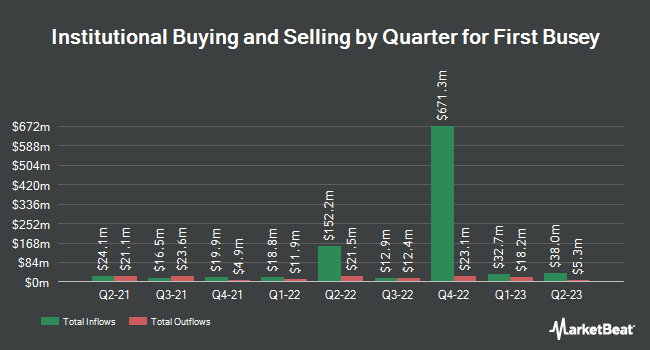 Alithya Group and The Competition Head to Head Survey