Complete the form below to receive the latest headlines and analysts' recommendations for Independent Bank Group with our free daily email newsletter:

Independent Bank Group (NASDAQ:IBTX) last issued its quarterly earnings data on Tuesday, July 28th. The bank reported $1.14 earnings per share (EPS) for the quarter, beating the Thomson Reuters’ consensus estimate of $0.89 by $0.25. Independent Bank Group had a net margin of 26.11% and a return on equity of 8.76%. The company had revenue of $153.75 million for the quarter, compared to analyst estimates of $141.77 million. During the same period last year, the company posted $1.22 earnings per share.

The company also recently declared a quarterly dividend, which will be paid on Thursday, August 20th. Stockholders of record on Monday, August 10th will be given a dividend of $0.25 per share. The ex-dividend date is Friday, August 7th. This represents a $1.00 annualized dividend and a dividend yield of 2.28%. Independent Bank Group’s dividend payout ratio is currently 19.69%. 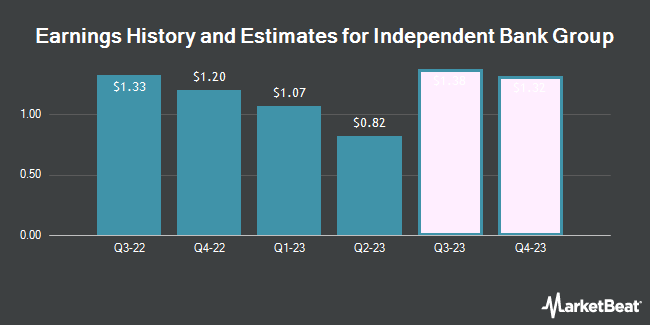 Harley-Davidson Inc Forecasted to Earn Q3 2020 Earnings of $0.91 Per Share