Complete the form below to receive the latest headlines and analysts' recommendations for Citizens & Northern with our free daily email newsletter:

Citizens & Northern Co. (NASDAQ:CZNC) declared a quarterly dividend on Thursday, July 16th, Fidelity reports. Stockholders of record on Monday, July 27th will be given a dividend of 0.27 per share by the financial services provider on Friday, August 7th. This represents a $1.08 annualized dividend and a dividend yield of 5.70%. The ex-dividend date of this dividend is Friday, July 24th.

CZNC has been the topic of a number of analyst reports. Piper Sandler initiated coverage on shares of Citizens & Northern in a research note on Wednesday, July 1st. They issued a “hold” rating and a $21.00 target price on the stock. BidaskClub cut shares of Citizens & Northern from a “sell” rating to a “strong sell” rating in a research note on Thursday, July 9th. Two research analysts have rated the stock with a sell rating and two have issued a hold rating to the company. The company presently has a consensus rating of “Hold” and a consensus price target of $21.00. 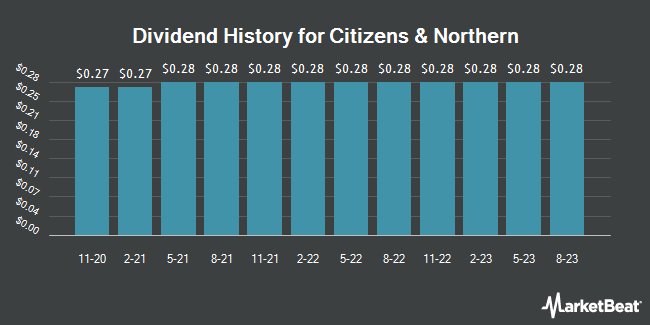