Complete the form below to receive the latest headlines and analysts' recommendations for Union Pacific with our free daily email newsletter:

Wall Street brokerages predict that Union Pacific Co. (NYSE:UNP) will post $4.41 billion in sales for the current quarter, according to Zacks Investment Research. Four analysts have made estimates for Union Pacific’s earnings, with the lowest sales estimate coming in at $4.27 billion and the highest estimate coming in at $4.47 billion. Union Pacific posted sales of $5.60 billion in the same quarter last year, which would indicate a negative year over year growth rate of 21.3%. The business is expected to announce its next quarterly earnings report before the market opens on Thursday, July 23rd.

According to Zacks, analysts expect that Union Pacific will report full year sales of $19.69 billion for the current year, with estimates ranging from $18.64 billion to $20.12 billion. For the next fiscal year, analysts expect that the company will report sales of $21.01 billion, with estimates ranging from $19.73 billion to $21.61 billion. Zacks’ sales averages are a mean average based on a survey of sell-side research analysts that follow Union Pacific.

Union Pacific (NYSE:UNP) last announced its quarterly earnings data on Thursday, April 23rd. The railroad operator reported $2.15 EPS for the quarter, topping the Zacks’ consensus estimate of $1.90 by $0.25. Union Pacific had a return on equity of 34.15% and a net margin of 27.85%. The business had revenue of $5.23 billion during the quarter, compared to the consensus estimate of $5.08 billion. During the same period in the previous year, the company posted $1.93 earnings per share. The business’s revenue for the quarter was down 2.9% on a year-over-year basis.

The business also recently announced a quarterly dividend, which was paid on Tuesday, June 30th. Stockholders of record on Friday, May 29th were paid a $0.97 dividend. The ex-dividend date was Thursday, May 28th. This represents a $3.88 dividend on an annualized basis and a dividend yield of 2.29%. Union Pacific’s dividend payout ratio (DPR) is currently 46.30%.

Union Pacific Corporation, through its subsidiary, Union Pacific Railroad Company, engages in the railroad business in the United States. It offers transportation services for agricultural products, including grains, commodities produced from grains, fertilizers, and food and beverage products; coal and sand, as well as petroleum, liquid petroleum gases, and renewables; and construction products, industrial chemicals, plastics, forest products, specialized products, metals and ores, and soda ash, as well as intermodal and finished vehicles.

Recommended Story: What are the economic characteristics of a bear market? 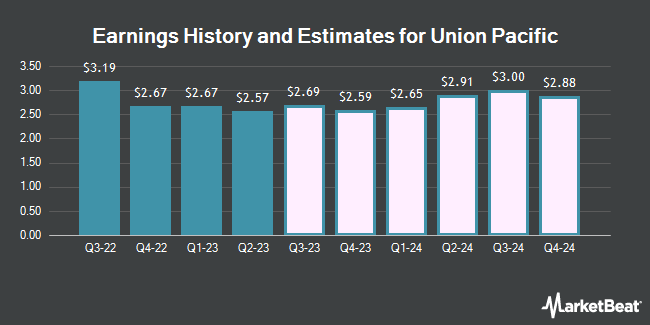