Complete the form below to receive the latest headlines and analysts' recommendations for Vinci with our free daily email newsletter:

UBS Group set a €96.00 ($111.63) price target on Vinci (EPA:DG) in a research note published on Monday, Borsen Zeitung reports. The firm currently has a buy rating on the stock.

VINCI SA engages in the concessions and contracting businesses worldwide. The company designs, finances, builds, and operates infrastructure and facilities comprising motorway, bridge and tunnel, airport, rail, and stadium facilities. It operates a motorway concession with a network of 4,443 kilometers in France; and 35 airports worldwide.

Recommended Story: What is a Fibonacci Channel? 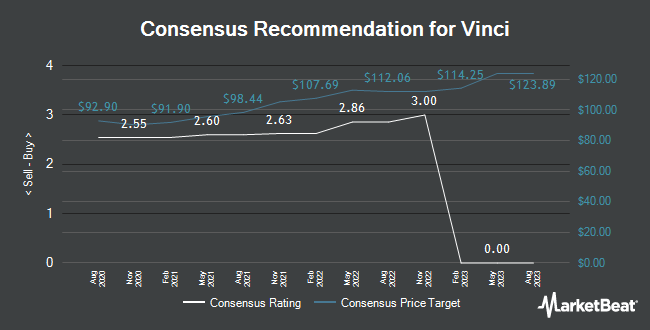 Receive News & Ratings for Vinci Daily - Enter your email address below to receive a concise daily summary of the latest news and analysts' ratings for Vinci and related companies with MarketBeat.com's FREE daily email newsletter.

Unilever Given a €39.00 Price Target by Royal Bank of Canada Analysts

Total Given a €38.00 Price Target at Royal Bank of Canada