Complete the form below to receive the latest headlines and analysts' recommendations for Campbell Soup with our free daily email newsletter:

Campbell Soup (NYSE:CPB) declared a quarterly dividend on Wednesday, March 25th, RTT News reports. Stockholders of record on Thursday, April 9th will be given a dividend of 0.35 per share on Monday, April 27th. This represents a $1.40 annualized dividend and a dividend yield of 3.21%.

Campbell Soup has a dividend payout ratio of 52.8% indicating that its dividend is sufficiently covered by earnings. Equities research analysts expect Campbell Soup to earn $2.72 per share next year, which means the company should continue to be able to cover its $1.40 annual dividend with an expected future payout ratio of 51.5%.

Campbell Soup (NYSE:CPB) last released its earnings results on Wednesday, March 4th. The company reported $0.72 earnings per share for the quarter, topping the consensus estimate of $0.66 by $0.06. The business had revenue of $2.16 billion for the quarter, compared to the consensus estimate of $2.16 billion. Campbell Soup had a net margin of 17.46% and a return on equity of 50.69%. The firm’s quarterly revenue was down .5% compared to the same quarter last year. During the same period last year, the firm posted $0.79 earnings per share. As a group, equities analysts expect that Campbell Soup will post 2.7 earnings per share for the current fiscal year. 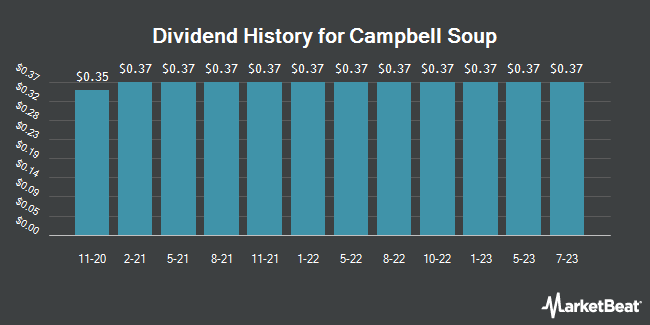