Complete the form below to receive the latest headlines and analysts' recommendations for PNM Resources with our free daily email newsletter:

Renaissance Technologies LLC lifted its position in PNM Resources Inc (NYSE:PNM) by 1.0% during the fourth quarter, according to the company in its most recent filing with the Securities & Exchange Commission. The fund owned 2,683,800 shares of the utilities provider’s stock after buying an additional 27,400 shares during the period. Renaissance Technologies LLC owned approximately 3.37% of PNM Resources worth $136,095,000 as of its most recent SEC filing.

PNM Resources (NYSE:PNM) last issued its earnings results on Friday, February 28th. The utilities provider reported $0.36 earnings per share (EPS) for the quarter, topping the Zacks’ consensus estimate of $0.33 by $0.03. PNM Resources had a return on equity of 9.68% and a net margin of 5.11%. The business had revenue of $408.32 million during the quarter, compared to analysts’ expectations of $471.49 million. During the same quarter in the previous year, the business earned $0.18 EPS. On average, analysts forecast that PNM Resources Inc will post 2.2 EPS for the current fiscal year.

The firm also recently announced a quarterly dividend, which will be paid on Friday, May 15th. Shareholders of record on Friday, May 1st will be issued a dividend of $0.308 per share. The ex-dividend date of this dividend is Thursday, April 30th. This is a positive change from PNM Resources’s previous quarterly dividend of $0.31. This represents a $1.23 annualized dividend and a yield of 3.17%. PNM Resources’s payout ratio is currently 56.94%.

PNM Resources, Inc, through its subsidiaries, engages in the energy and energy-related businesses in the United States. It operates through Public Service Company of New Mexico (PNM) and Texas-New Mexico Power Company (TNMP) segments. The PNM segment is primarily involved in the generation, transmission, and distribution of electricity.

Want to see what other hedge funds are holding PNM? Visit HoldingsChannel.com to get the latest 13F filings and insider trades for PNM Resources Inc (NYSE:PNM). 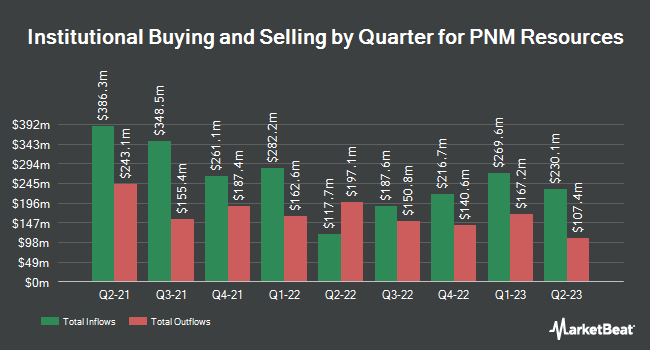