Complete the form below to receive the latest headlines and analysts' recommendations for Acacia Communications with our free daily email newsletter:

Acacia Communications, Inc. (NASDAQ:ACIA) has been given a consensus rating of “Hold” by the fifteen research firms that are covering the company, MarketBeat.com reports. Three analysts have rated the stock with a sell rating, eleven have assigned a hold rating and one has issued a buy rating on the company. The average 12 month target price among brokerages that have issued a report on the stock in the last year is $59.56.

In related news, VP Francis J. Murphy sold 377 shares of Acacia Communications stock in a transaction that occurred on Monday, December 2nd. The shares were sold at an average price of $66.81, for a total value of $25,187.37. The sale was disclosed in a legal filing with the SEC, which is available through the SEC website. Insiders sold 810 shares of company stock worth $54,483 over the last three months. 9.30% of the stock is currently owned by insiders.

Featured Story: What is a Derivative? 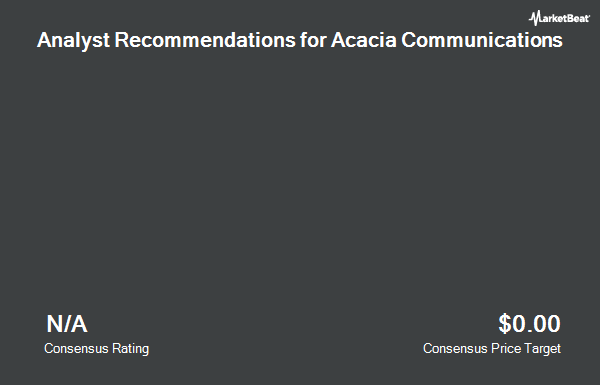