Complete the form below to receive the latest headlines and analysts' recommendations for Thermo Fisher Scientific with our free daily email newsletter:

According to Zacks, analysts expect that Thermo Fisher Scientific will report full-year sales of $25.50 billion for the current financial year, with estimates ranging from $25.43 billion to $25.52 billion. For the next financial year, analysts expect that the business will post sales of $26.97 billion, with estimates ranging from $26.85 billion to $27.16 billion. Zacks Investment Research’s sales averages are an average based on a survey of sell-side research firms that cover Thermo Fisher Scientific.

Thermo Fisher Scientific (NYSE:TMO) last posted its quarterly earnings data on Wednesday, October 23rd. The medical research company reported $2.94 earnings per share (EPS) for the quarter, topping analysts’ consensus estimates of $2.88 by $0.06. Thermo Fisher Scientific had a net margin of 14.24% and a return on equity of 17.16%. The company had revenue of $6.27 billion during the quarter, compared to the consensus estimate of $6.19 billion. During the same period in the previous year, the firm posted $2.62 EPS. The firm’s revenue was up 5.9% compared to the same quarter last year.

The firm also recently declared a quarterly dividend, which was paid on Wednesday, January 15th. Shareholders of record on Tuesday, December 17th were paid a $0.19 dividend. This represents a $0.76 annualized dividend and a yield of 0.23%. The ex-dividend date of this dividend was Monday, December 16th. Thermo Fisher Scientific’s dividend payout ratio is presently 6.83%.

Featured Article: What do I need to know about analyst ratings? 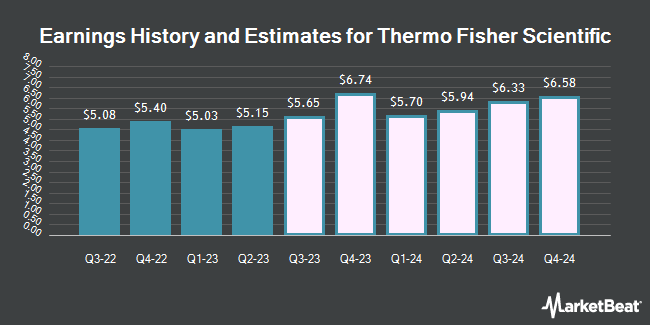 $0.23 Earnings Per Share Expected for Elanco Animal Health This Quarter

THEKEY Price Up 3% Over Last Week