Complete the form below to receive the latest headlines and analysts' recommendations for Renasant with our free daily email newsletter:

Renasant (NASDAQ:RNST) is scheduled to announce its earnings results after the market closes on Tuesday, January 21st. Analysts expect the company to announce earnings of $0.65 per share for the quarter.

Renasant (NASDAQ:RNST) last announced its quarterly earnings data on Monday, October 21st. The financial services provider reported $0.68 EPS for the quarter, missing the consensus estimate of $0.74 by ($0.06). Renasant had a net margin of 24.85% and a return on equity of 8.53%. The firm had revenue of $146.78 million for the quarter, compared to analyst estimates of $151.37 million. During the same quarter in the prior year, the firm earned $0.78 earnings per share. On average, analysts expect Renasant to post $3 EPS for the current fiscal year and $3 EPS for the next fiscal year.

In other Renasant news, EVP James W. Gray sold 2,500 shares of the company’s stock in a transaction that occurred on Thursday, October 31st. The shares were sold at an average price of $34.57, for a total value of $86,425.00. Following the completion of the transaction, the executive vice president now directly owns 55,472 shares in the company, valued at approximately $1,917,667.04. The sale was disclosed in a filing with the SEC, which is available at this hyperlink. Insiders own 3.64% of the company’s stock.

Recommended Story: What is a capital gain? 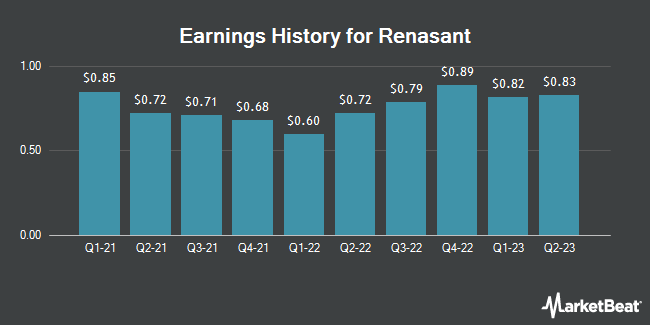 Receive News & Ratings for Renasant Daily - Enter your email address below to receive a concise daily summary of the latest news and analysts' ratings for Renasant and related companies with MarketBeat.com's FREE daily email newsletter.

$1.35 Billion in Sales Expected for Analog Devices, Inc. This Quarter