Complete the form below to receive the latest headlines and analysts' recommendations for Ingersoll-Rand with our free daily email newsletter:

Ingersoll-Rand PLC (NYSE:IR) SVP Paul A. Camuti sold 10,710 shares of the stock in a transaction on Wednesday, December 11th. The shares were sold at an average price of $132.19, for a total value of $1,415,754.90. Following the completion of the sale, the senior vice president now owns 70,804 shares of the company’s stock, valued at approximately $9,359,580.76. The transaction was disclosed in a filing with the Securities & Exchange Commission, which can be accessed through this link.

Ingersoll-Rand (NYSE:IR) last posted its quarterly earnings results on Tuesday, October 29th. The industrial products company reported $1.99 earnings per share for the quarter, topping the Zacks’ consensus estimate of $1.91 by $0.08. Ingersoll-Rand had a net margin of 8.38% and a return on equity of 21.72%. The business had revenue of $4.16 billion for the quarter, compared to the consensus estimate of $4.30 billion. During the same period in the prior year, the business posted $1.75 earnings per share. Ingersoll-Rand’s revenue for the quarter was up 2.8% compared to the same quarter last year. As a group, analysts predict that Ingersoll-Rand PLC will post 6.4 EPS for the current year.

The business also recently declared a quarterly dividend, which will be paid on Tuesday, December 31st. Stockholders of record on Friday, December 6th will be paid a $0.53 dividend. This represents a $2.12 dividend on an annualized basis and a dividend yield of 1.58%. The ex-dividend date of this dividend is Thursday, December 5th. Ingersoll-Rand’s dividend payout ratio (DPR) is presently 37.79%. 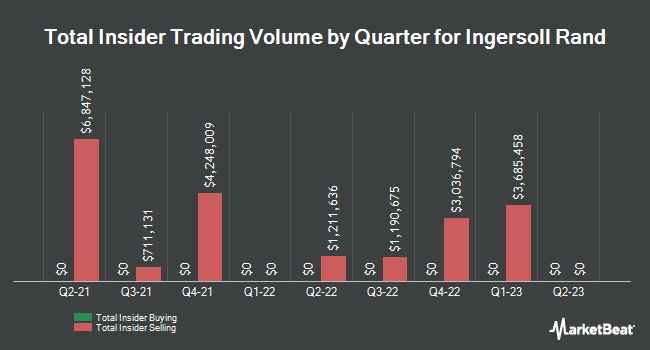 Toll Brothers Inc Expected to Announce Earnings of $0.45 Per Share