Complete the form below to receive the latest headlines and analysts' recommendations for MasTec with our free daily email newsletter:

Brokerages forecast that MasTec, Inc. (NYSE:MTZ) will post $1.26 earnings per share for the current fiscal quarter, Zacks Investment Research reports. Five analysts have issued estimates for MasTec’s earnings, with the highest EPS estimate coming in at $1.30 and the lowest estimate coming in at $1.24. MasTec reported earnings of $1.07 per share during the same quarter last year, which indicates a positive year-over-year growth rate of 17.8%. The business is expected to report its next quarterly earnings report on Thursday, February 27th.

On average, analysts expect that MasTec will report full year earnings of $5.17 per share for the current fiscal year, with EPS estimates ranging from $5.16 to $5.21. For the next year, analysts anticipate that the firm will post earnings of $5.59 per share, with EPS estimates ranging from $5.30 to $5.89. Zacks’ earnings per share averages are a mean average based on a survey of sell-side research firms that that provide coverage for MasTec.

MasTec (NYSE:MTZ) last released its quarterly earnings results on Thursday, October 31st. The construction company reported $1.73 earnings per share for the quarter, beating the consensus estimate of $1.59 by $0.14. The firm had revenue of $2.02 billion for the quarter, compared to analysts’ expectations of $2.14 billion. MasTec had a return on equity of 24.39% and a net margin of 4.37%. The company’s revenue was up 2.0% compared to the same quarter last year. During the same period in the prior year, the firm earned $1.33 EPS.

MasTec, Inc, an infrastructure construction company, provides engineering, building, installation, maintenance, and upgrade services for communications, energy, utility, and other infrastructure primarily in the United States and Canada. It operates through five segments: Communications, Oil and Gas, Electrical Transmission, Power Generation and Industrial, and Other. 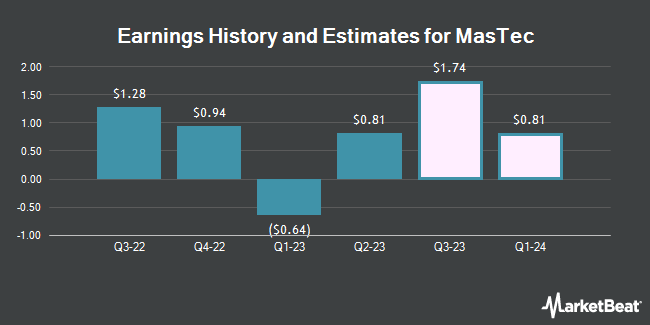 Receive News & Ratings for MasTec Daily - Enter your email address below to receive a concise daily summary of the latest news and analysts' ratings for MasTec and related companies with MarketBeat.com's FREE daily email newsletter.

Mainframe Price Up 6.1% This Week