Complete the form below to receive the latest headlines and analysts' recommendations for Marten Transport with our free daily email newsletter:

Equities analysts expect Marten Transport, Ltd (NASDAQ:MRTN) to report $0.28 earnings per share for the current quarter, according to Zacks Investment Research. Three analysts have made estimates for Marten Transport’s earnings, with the highest EPS estimate coming in at $0.29 and the lowest estimate coming in at $0.28. Marten Transport posted earnings per share of $0.29 during the same quarter last year, which would indicate a negative year-over-year growth rate of 3.4%. The business is expected to announce its next earnings results on Thursday, January 23rd.

According to Zacks, analysts expect that Marten Transport will report full year earnings of $1.10 per share for the current fiscal year, with EPS estimates ranging from $1.09 to $1.11. For the next financial year, analysts forecast that the business will post earnings of $1.17 per share, with EPS estimates ranging from $1.15 to $1.22. Zacks’ EPS calculations are an average based on a survey of sell-side research analysts that cover Marten Transport.

Marten Transport (NASDAQ:MRTN) last announced its quarterly earnings data on Thursday, October 17th. The transportation company reported $0.30 EPS for the quarter, topping the Zacks’ consensus estimate of $0.28 by $0.02. The firm had revenue of $214.97 million for the quarter, compared to the consensus estimate of $208.10 million. Marten Transport had a return on equity of 10.40% and a net margin of 7.36%. The firm’s revenue was up 7.7% compared to the same quarter last year. During the same quarter last year, the business posted $0.28 earnings per share.

The business also recently announced a quarterly dividend, which will be paid on Friday, December 27th. Shareholders of record on Friday, December 13th will be given a $0.03 dividend. The ex-dividend date is Thursday, December 12th. This represents a $0.12 dividend on an annualized basis and a yield of 0.58%. Marten Transport’s payout ratio is currently 12.00%.

Marten Transport, Ltd. operates as a temperature-sensitive truckload carrier for shippers in the United States, Canada, and Mexico. It operates through four segments: Truckload, Dedicated, Intermodal, and Brokerage. The Truckload segment transports food and other consumer packaged goods that require a temperature-controlled or insulated environment. 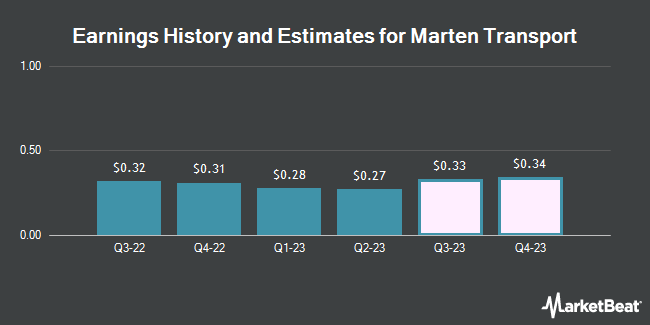