Complete the form below to receive the latest headlines and analysts' recommendations for Inphi with our free daily email newsletter:

$99.86 Million in Sales Expected for Inphi Co. (NYSE:IPHI) This Quarter

Equities research analysts expect Inphi Co. (NYSE:IPHI) to post sales of $99.86 million for the current quarter, according to Zacks. Six analysts have issued estimates for Inphi’s earnings, with estimates ranging from $99.73 million to $100.03 million. Inphi reported sales of $86.53 million in the same quarter last year, which indicates a positive year over year growth rate of 15.4%. The business is expected to announce its next earnings results on Tuesday, February 4th.

On average, analysts expect that Inphi will report full year sales of $362.64 million for the current year, with estimates ranging from $362.47 million to $363.00 million. For the next year, analysts forecast that the business will post sales of $439.58 million, with estimates ranging from $430.00 million to $445.78 million. Zacks Investment Research’s sales averages are an average based on a survey of sell-side analysts that that provide coverage for Inphi.

Inphi (NYSE:IPHI) last posted its quarterly earnings results on Tuesday, October 29th. The semiconductor company reported $0.45 EPS for the quarter, beating the consensus estimate of $0.37 by $0.08. Inphi had a positive return on equity of 0.46% and a negative net margin of 23.23%. The firm had revenue of $94.23 million during the quarter, compared to analysts’ expectations of $90.09 million. During the same quarter in the prior year, the firm posted $0.30 EPS. The company’s revenue for the quarter was up 20.8% on a year-over-year basis.

In other Inphi news, VP Ron Torten sold 3,083 shares of the business’s stock in a transaction dated Friday, November 15th. The shares were sold at an average price of $73.60, for a total value of $226,908.80. The transaction was disclosed in a document filed with the SEC, which can be accessed through the SEC website. Also, Director Chenming Hu sold 7,000 shares of the company’s stock in a transaction dated Monday, November 25th. The stock was sold at an average price of $71.00, for a total transaction of $497,000.00. Following the sale, the director now directly owns 65,503 shares in the company, valued at $4,650,713. The disclosure for this sale can be found here. Insiders sold 52,624 shares of company stock worth $3,860,880 over the last quarter. Company insiders own 3.30% of the company’s stock. 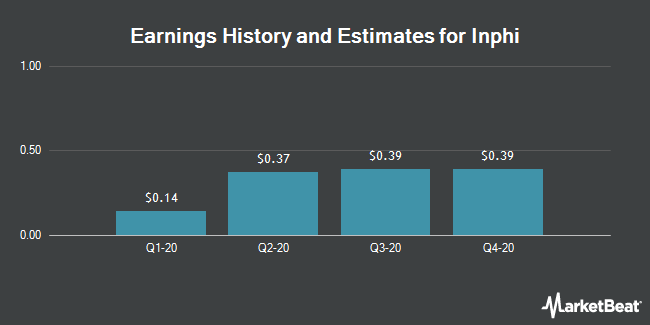 Receive News & Ratings for Inphi Daily - Enter your email address below to receive a concise daily summary of the latest news and analysts' ratings for Inphi and related companies with MarketBeat.com's FREE daily email newsletter.

-$0.50 Earnings Per Share Expected for Capstone Turbine Co. This Quarter