Complete the form below to receive the latest headlines and analysts' recommendations for Green Dot with our free daily email newsletter:

Green Dot (NYSE:GDOT) had its target price decreased by Craig Hallum from $50.00 to $40.00 in a report published on Friday, The Fly reports. Craig Hallum currently has a buy rating on the financial services provider’s stock.

Green Dot (NYSE:GDOT) last issued its quarterly earnings results on Thursday, November 7th. The financial services provider reported $0.20 earnings per share (EPS) for the quarter, topping analysts’ consensus estimates of ($0.12) by $0.32. Green Dot had a return on equity of 14.94% and a net margin of 10.25%. The firm had revenue of $240.40 million for the quarter, compared to analyst estimates of $232.94 million. During the same period last year, the company earned $0.59 EPS. The firm’s quarterly revenue was up 1.7% on a year-over-year basis. Sell-side analysts expect that Green Dot will post 2.18 EPS for the current fiscal year.

In other news, CRO Brett Narlinger sold 5,602 shares of the firm’s stock in a transaction dated Friday, September 6th. The stock was sold at an average price of $28.32, for a total value of $158,648.64. Following the transaction, the executive now directly owns 71,624 shares in the company, valued at approximately $2,028,391.68. The transaction was disclosed in a document filed with the SEC, which is accessible through the SEC website. Company insiders own 7.80% of the company’s stock.

Featured Article: How a Strangle Strategy is different from a Straddle Strategy 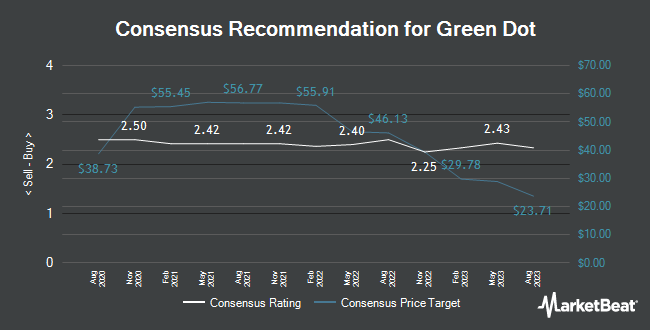