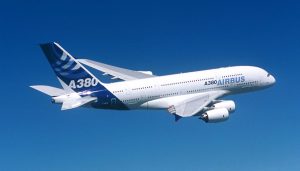 Airbus has announced upgrades to its A380 jet which will see the superjumbo getting fuel-saving winglets which are about 4.7 meters high and downlets that measure 1.2 meters. With the extensions as well as other wing refinements, efficiency will be boosted by approximately 4%. The upgraded jet will now be known as the ‘A380plus’. Currently the A380 is the biggest passenger jet in the world. The upgrades have been made in the hope of attracting buyers for the jet that has experienced a dearth of orders.

Earlier in April Airbus introduced a revised layout of the cabin which will result in 80 more passengers being accommodated without compromises being made on comfort. The revised cabin layout will also see the overall cost of each seat being reduced by 13% compared to the current model. Additionally, the maximum take-off weight of the superjumbo jet will now be increased to 578 metric tons in order to cater for the new format that is denser. The range will also be increased by 300 nautical miles for the configuration that has ha seating capacity of 550.

“The A380plus is an efficient way to offer even better economics and improved operational performance,” said the chief of sales at Airbus, John Leahy, in a release.

Other costs that will reduce as a result of the upgrades includes the maintenance costs since the superjumbo jet will fly for longer intervals in between maintenance checks.

The superjumbo jet does not however meet the specifications that Emirates, the leading customer for the European planemaker, had been demanding. Airbus and the firm that makes engines for its planes, Rolls-Royce, had refused those demands on the grounds that they lack a business case. However, Emirates is still expected to commit to purchasing about 20 of the upgraded superjumbo.

Airlines have not been enthusiastic about the A380 and some of their concerns have to do with doubts over making money on such a giant plane which is priced at $436.9 million. So far 317 such planes have been sold by Airbus. Airlines have instead been preferring smaller twin-engine planes which are cheaper to maintain and fly.

The upgrades to the superjumbo come as the jet maker prepares for the Paris Airshow. Airbus is also said to be considering reducing production figures for the superjumbo jet to less than one every month beginning next year if orders are not secured this year.