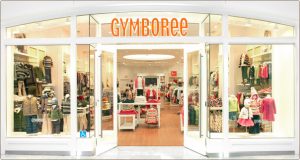 The children’s clothing retailer Gymboree Corp has officially filed for Chapter 11 bankruptcy protection in anticipation of a dire need to reorganize the company and lower its debt. It is a sad story that is becoming all too common in the retail world today, with this particular outlet commenting how they had received $35 million in new debtor-in-possession financing from most of their loan holders as well as roughly $273 million in additional financing from their existing lenders.

Indeed, Gymboree appears to to be suffering a fate similar to many smaller mall brands as physical mall traffic continues to decline. Consumers are flocking to the internet to take advantage of massively lower prices and the convenience of 24-hr access and various free shipping options. Online sales for Gymboree only represent about 20 percent of the company’s total revenue.

While the outlook is certainly grim, Gymboree Chief Executive Daniel Griesemer comments, “The support of our lenders and their new financing commitment underscores their confidence in the company. We expect to move through this process quickly and emerge as a stronger organization that is better positioned in today’s evolving retail landscape.”

It is of significant import to note that Gymboree actually owns three brands. These are: Gymboree, Janie and Jack, and Crazy 8. And, as of April of this year, the company reported the operation of a total of 1,281 retail stores across the United States and Canada.

Fortunately for Gymboree, this bankruptcy announcement was widely expected. The company refused to pay some of its bills over the past few months, which easily put them in the crosshairs of creditors. Buying a little time, perhaps, the company now says it hopes to cut at least $1 billion of its $1.4 billion in debt in order to win some approval for its new plan, by the end of September.

Griesemer continues, “We expect to move through this process quickly and emerge as a stronger organization that is better positioned in today’s evolving retail landscape, with the right size store footprint and greater financial flexibility to invest in Gymboree’s long-term growth.”

With all that in mind, though, the company still managed to post a profit—before interest, taxes, amortization, and depreciation—of $71 million last year. This is down from $94 million in 2015, a sure sign of things to come if the company does not make the necessary changes.